Boy did we have a ball!

Blake, Mom, and I, went to the beach yesterday. Jordan (The Bear), had to work, so he was stuck dealing with elderly customers, all of whom suffer from assorted and indescribable ailments, and who have absolutely nothing better to do than to tell him about said ailments in nauseating detail, while he tries to explain complicated electronics to them. (We get all sorts of compliments on him all the time! They just love his patience and attentiveness.) All the while we cavorted in the surf and kicked up the sand.

Casperson Beach near Venice is one of our favorite beaches in Florida. Not only does it have great picnic areas, it also has Native American burial mounds, sharks teeth galore, shells, and to top it all off, great fishing.

We went to our favorite picnic table and set out our usual array of accouterments, while Blake looked for something to start a fire with. We won't use lighter fluid. We're kinda borderline on the matches business, but I haven't made a bow and drill yet, nor do we have a flint an steel set... It didn't take him long to get a good ball of palm fuzz and a handful of twigs. Before Mom and I had the table set, he had the tinder set up and the lump charcoal ready. A quick strike of a match and presto, fire started!

While we waited for the charcoal to ash over, we wandered around the mangrove estuaries to see what was to be seen. Occasionally we find an interesting shell or even a good shark's tooth. A juvenile armadillo made his presence known by rooting around as they do looking for the odd grub or ant in the leaf litter. A few egrets were resting and a couple of squirrels jumped from tree to tree, scolding us for intruding.

We headed back to the picnic area and Blake took the cast iron pot and set it over the fire. Mom popped the cooler open and served us a couple of ice cold IBC Cream Sodas to bolster our spirits, while I opened a can of refried beans, put a half stick of butter in the pot, and took the cooked garlic out of the cooler. (Here's a neat idea: The night before, boil a head of garlic for about twenty minutes. If you make soups regularly you can boil an extra one or two while making the soup. It softens the garlic and takes the bite out of it. When it cools, take the paper off the cloves and put them in a small plastic container or some aluminum foil.) The beans went into the pot along with the garlic. I stirred them occasionally to keep them from burning. In the meantime Mom had pulled the flank steak out of the cooler. We prepared it the previous night and had left it marinating in a large ziploc bag. Olive oil, onion, garlic, salt and pepper, and of course, white wine makes up the marinade.

When the grill got good and hot, I slapped the steak on it and let it sizzle. A couple of flips and a few minutes later the steak was done. Mom produced the cutting board, a sharp knife, and I sliced that beautiful cut of meat across the grain. Tortillas were heated right where the steak was, a little bit of butter rubbed on the warmed flour circle. With refried beans spooned on, steak slivers, and shredded cheese to top it off, no king ever ate better!

With bellies full we picked up our fishing gear and headed to the surf line.

Bubby (as I call Blake) throws a pretty good cast net and managed to catch us a couple of dozen shad. We baited our hooks and cast them out. I hooked a couple of small Jack Crevalles almost immediately. After an hour or so, Blake gets a good hit. Rod bent and drag squealing, he held the rod high and let it do the work. The thrilled look on his face was unforgettable! He had to work that fish a good hundred yards down the beach, and there were a couple of times that I thought he might get spooled. But the drag and good rod handling finally wore that fish down! 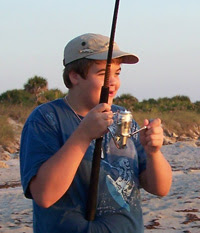 When it was all said and done he beached a 21 inch bluefish. I warned Bubby not to put his fingers anywhere near that fish's chompers! Blues have been known to bite people's fingers off.

After the requisite pictures he hit the water again and before long had hooked another fish. This time after a much shorter fight, he brought in an 18 1/2 inch speckled trout! 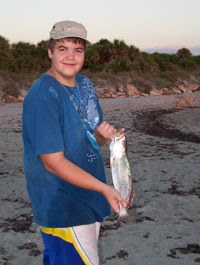 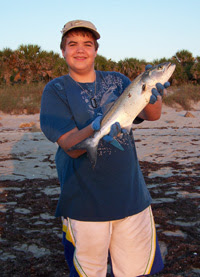 We all had a great time. There's nothing like watching a boy enjoying the great outdoors, and all it has to offer!