Making Biltong and Jerkey at Home 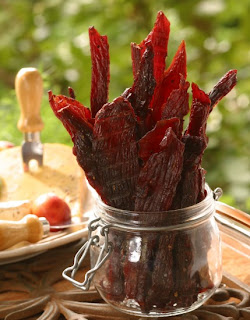 Some time ago, my "compatriota" Mike from Native Hunt asked me about drying meat without smoke or heat. Coincidentally my good friend Ed, over at Wild Ed's Texas Outdoors, happens to have put together a fantastic tutorial on making Jerky American style. Excuse me, make that Texas style! (You might remember that he also did a great tutorial post on European style skull mounts.) Making jerky is a great way to stock up on some healthy snacks after the hunting season is over and it is a great skill to have regardless. Wild Ed's Texas Style Jerky takes you step by step on the artful and tasty way to make some homemade jerky.

Now, I'm a big fan of biltong, and making it via the southern Africa method of drying meats. There is nothing more delicious than the rich taste of meat that a well dried piece of biltong has.

I make my own using a couple of methods. Both are done indoors; one using the AC air handler, and the other a cardboard box and a fan. They both work about the same, though the AC method is about a day or two faster.

First thing you need is a hunk of meat. You can use beef, deer, elk, any of the deers (fallow, axis, etc). This does not work with pork, and for some reason, I seem to recall that it shouldn't be done with pronghorn antelope. I don't remember why, all I do remember is that for some reason, way in the back of my synapses a warning flashes repeatedly...

Cut hunk of meat that will soon be Biltong, with the grain in slices about an inch thick. Now cut them into half inch thick strips. It's easier to slice an inch thick piece off of a large cut, than it is to slice 1/2 inch. The thinner slices come off easily from the flat slab. Sprinkle them well with salt, and put them in a container over night in the fridge. The next day take them out of the fridge, rinse them off and dry them with a paper towel. Now you can use whatever spices you prefer. I like granulated garlic, Old Bay Seasoning, or Everglades Heat on mine. Now it's time to go and dry your biltong.

Using your AC to Dry Meat 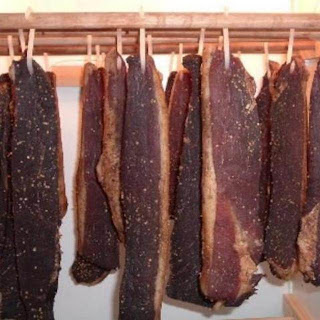 With the AC method you need to have an air handler unit that allows you access and enough depth to allow meat to hang freely. It also helps if your wife won't notice the smell of meat, garlic, and pepper wafting throughout the house.

I have found that paper clips are by far the easiest thing to use to hang the meat from. Just un-bend them into an "S" shape, and skewer the end of the strip on it.

Check the meat often, starting the third day or so. Just slice the end off and see how dry it has gotten.

Building a Box to Dry the Meat
The cardboard box is fairly simple also. Obtain a tall narrow box; the type used by movers is great. They are about eighteen inches square and four feet high. Get some 3/8th inch dowels and space them out two inches apart, about two inches below the top. Cut a slot six to eight inches high and as wide as the box an inch off the bottom. This is the air entry. Now cut slots, one inch in height and about twelve inches wide on each side near the top, these are the exit holes. Open the top, and hang the meat making sure it doesn't touch either the box or an adjoining piece.

Close the top, plug the fan in and aim it at the intake slot, and wait.

Tom of Boomers and BS knows a thing or two about Biltong. He added the following:

"A 40 watt bulb in a proper socket wired safely in a board at the bottom of the box a decent distance below the meat hangers works as well as a fan in a cardboard box if you build it of wood. Some sort of drip screening/drip tray(s) (Maybe a big #10 can with holes in the sides. Albert) over the bulb itself and for general purposes of keeping things tidy helps. Ventilation holes (with screen door mesh behind them to keep flies out) in the box towards the upper end and on the top and pay attention to electrical and fire safety in your design.


Bulb design works better/faster than the fan design in cooler climates. Combination of both works too. Friend of mine built his with a lightbulb and a PC cooling fan to ventilate it."

The way to test the meat is to take slices off the end. If it's not dry enough for you, let it dry another day. I like mine a little on the wet side.

Things to remember, you need to do this in a climate controlled area. In other words, indoors because the relative humidity is constant. My guess is that you could do this outdoors if you knew that you would have stable temperatures and low humidity for four or five days. You just need a constant breeze to carry off any moisture being released."

Tom also added, "In Africa it's usually done open air, outside, in what amount to mesh tents/cabinets to keep the flies off. Not sure about pronghorn but almost all the biltong I have eaten in Africa was from the Antelope family, most especially Impala. Not uncommon for locals to convert near an entire Impala to biltong."

Pepper is a great fly repellent, if you're going to try this outdoors.

Now biltong is delicious, and it is very easy to eat the equivalent of two pounds of meat in a twenty minute sitting. You have been warned!

Though he spends most of his time writing and keeping the world safe for democracy, Albert was actually a student of biology. Really. But after a stint as a lab tech performing repetitious and mind-numbing processes that a trained capuchin monkey could do better, he never returned to the field. Rather he became a bartender. As he once said, "Hell, I was feeding mice all sorts of concoctions. At the club I did the same thing; except I got paid a lot better, and the rats where bigger." He has followed the science of QDM for many years, and fancies himself an aficionado. If you have any questions, or just want to get more information, reach him via TheRaschOutdoorChronicles(at)MSN(dot)com.
Posted by Albert A Rasch at 5/26/2011 12:10:00 AM 9 comments:

Email ThisBlogThis!Share to TwitterShare to FacebookShare to Pinterest
Labels: Chronicles' Project, Self Sufficiency

© 2010-11 Albert A Rasch and
The Rasch Outdoor Chronicles


Hunter and Angler Fact Sheet!
Well it's that time of year again where we are all thinking about the summer that is soon to be here, and all the fun and frolic! 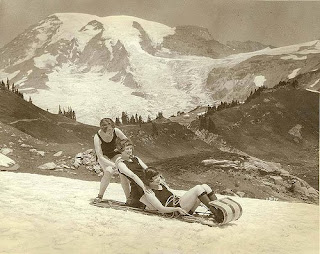 Ummm... Yeah...
But let's not forget our responsibilities to educate and elucidate the facts about or sporting pastimes for our non-sporting friends and neighbors.

The National Hunting and Fishing Day Organization has several assets available for the conservationist to use. Among them is this easily printed PDF with great facts on the leadership and conservation that Hunters and Anglers provide in the great outdoors.


Click below for PDF
Hunter and Angler Fact Sheet
Take a few moments, and print out a dozen copies, (it's only a single side). Share them with non-hunting or non-fishing friends and let them know the facts about hunters and anglers. It is up to you to make sure our friends and neighbors understand the science behind our sport along with the facts and our own personal beliefs