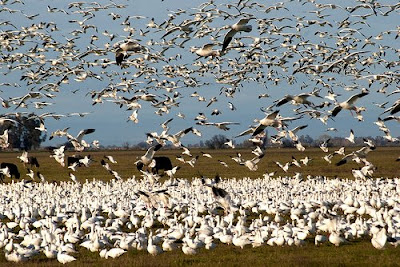 Snow Goose Hunting in Missouri and Nebraska
I have never had the opportunity to waterfowl, but that is going to change next year. Thanks to Nebraska Hunting Company and my friend J Scott Croner, I am going to have the opportunity to bust snow geese this spring in the Squaw Creek area of Missouri.

Never known to actually ask a professional’s advise until after the fact, I thought I would do a little research on Snow Geese and hunting them. I thought that many of you who haven’t tried waterfowling might find this interesting and maybe want to give it a try.

I went and checked Holly Hieser’s blog, NorCalCazadora, first. I know that holly is an avid waterfowler and I figured that would be as good a place as any to get the inside skinny on tips and techniques. Holly has plenty to offer at her blog and even scored a Snow goose of her own during "One Last Hurrah!"

As it turns out, there is a lot of preparation required in order to have a successful Snow goose hunt.

Probably the most critical aspect, next to actually being somewhere that the Snow geese are at, is the need for appropriate clothes and boots. Nothing will ruin a hunt quicker than being wet, cold, and uncomfortable. Do yourself a favor, and your hunting buddies too, and make sure your apparel and footwear are appropriate for the terrain, and that they are sound and in good condition. Boots should be of a good quality, and water resistant. They should support you well; the furrows in cut-down croplands will twist your ankle just as sure as a gopher hole. You have to wear camouflage in order to fool the birds, so pick the right pattern for the terrain you are in. I consulted with Nebraska Hunting Company guides to make sure what I had would work. Bring an old white bed sheet with you to emulate snow patches.

Those darn birds have really good eyes. So hide well! Make sure nothing is left out that doesn’t belong because the birds will spot it. Lunch pails, trash, cartridge boxes will be spotted by these sharp eyed geese, and they’ll find another, more appealing, landing zone, and you will be out of luck. Since they are so sharp eyed, you are going to have to hump the last ½ mile or so with all your gear. Boots should be broken in, clothes should be worn in layers if it’s cold, and your shotgun should have a removable sling.

Depending on the technique being used, your guide may have placed anywhere from 500 to 2000 decoys in a spread, or may decide to move or add to it. Though it by no means is required, feel free to offer some assistance in resetting them; it builds character, and more importantly it build rapport.

Use a shotgun that you are comfortable with. The Snow geese will come in close. You really don’t need 3” magnum shells. 2 ¾ “ loaded with #1 or 2# shot will work well. I don’t own a fancy shotgun, but even my serviceable single shot 16 should do the trick. When it comes time for shooting, seasoned waterfowlers recommends that you wait until the birds have landed. When they take off again is the time to shoot, and you may be rewarded with a double if you are quick enough. But remember, pick your bird and pick the shot.

Normally you will be with other hunters, unless you’re out there on your own. When there are a couple or more of you, and to avoid crossing barrels and shooting at the same birds, agree beforehand on vectors of fire. “I’m on the right from here to here, you are in the middle, and you are there to the left.” Good manners, they don’t cost anything, but they pay huge dividends! Adjust your fields of fire, as the flights require, so everyone has a good opportunity. And remember safety and good gun handling practices.

Birds will start flying at dawn and stop when it is time to roost. I suppose they go back once their bellies are full, so it could be early in the morning or late. You just won’t know until you do. The same goes for the afternoon, they might come in early, or they might just wait until dusk. They will return to a field as long as there is still grain to be picked out of the ground, but I understand that after being shot at, that flock will not return. You might get three or four feeding times of shooting before all the Snow geese wise up. Then it is time to do go looking for them again. That’s where an experienced snow goose outfitter like Scott Croner is invaluable.

When you choose an outfitter like Nebraska Hunting Company, it needs to have the contacts and concessions that allow them to pick and choose from different fields to accommodate the clients. Check their references and testimonials, nothing speaks more highly of an outfitter and his guides than satisfied customers.

The Snow goose has bred so prolifically that they are now in danger of destroying their nesting grounds in the Arctic Tundra. Because of this there is a need to thin them down for their own health and welfare. Missouri in conjunction with Federal wildlife management teams have created very liberal seasons.

“The Conservation Order for light geese will be in effect from January 31-April 30 with no bag limit. Hunters may use electronic calls and unplugged shotguns, and shoot from ½ hour before sunrise to ½ hour after sunset. A valid Missouri Migratory Bird Hunting Permit is the only permit required for residents and nonresidents during this time. A small game hunting license and a federal duck stamp are not required during the Conservation Order.”
Missouri Waterfowl Seasons

But the best hunting during the Conservation Order is in the springtime when Missouri plays host to over a million Snow geese heading back up north. With that many birds coming through, and using an outfitter like Scott Croner with his access to private concessions, it is going to provide an exceptional chance for an unforgettable hunt and experience.

I am definitely looking forward to it!
Best Regards,
Albert A Rasch™
Member:Kandahar Tent Club
Member: Hunting Sportsmen of the United States HSUS (Let 'em sue me.)
The Hunt Continues...