Somethings Never Change... Then Again, Some Do

Between a Rock and a Hard Place

Every morning, I waltz into the office at about 04:50 AM. I flip on the lights, turn on the coffee machine, and crank up the computer. Usually I delve right into my projects, checking sources, rereading articles, or doing a search on some obscure point or reference. So when it comes on and the cheerful voice of my e-mail alert says “You have mail,” I click on the icon, and lo and behold its not just Kristine (Outdoor Bloggers Summit), but Holly (NorCalCazadora) too. “Aw crap.” I thought. “What I do now?” Anytime two women call, write, or even talk to you, on the same day, the odds of you surviving to nightfall have exponentially risen against you. It doesn’t matter what you have or haven’t done, you’re in for it one way or the other. At least that’s my experience.

Anyway, lucky for me, both the ladies were just concerned with my well being. And now it’s been a few days and nothing bad has happened to me, so I must have ducked that one… whatever it was…

The Irresistible Force Meets the Unmovable Object
(with Albert in the middle…),

or
Out of the frying pan and into the brush fire.

I’ve never felt like Atlas, holding the weight of the world on my shoulders. I’m not one of those pale, over educated, ivory tower types that can’t see much past their moldy noses, moldy tomes, and even moldier philosophies. I’m an action type: Sgt. Rock, Easy Company. That’s my style. Toss in a little Scipio, a dash of Custer, round it out with a sprinkle of Gibbons, and you pretty much got me pegged. But lately things are no longer as simple as they once were.

It all started with Todd’s blog “Primitive Point” and the sudden realization that I too could write for the world at large! I love writing for the Rasch Outdoor Chronicles. It reignited a long dormant passion for learning and communicating. Every one of my posts has told you all something about me and my admittedly parochial view on life and the world around me. Not that I haven’t kept a weather eye on the social and political storms that abound on every horizon, but to me they have always seemed to be way over there, just beyond sight.

It was Denny at Stop MTR that really opened my eyes to the very real disasters that are right at our doorsteps. But the destruction of the Appalachia is just a symptom of the malaise that has gripped our nation and our culture. (Not that it isn’t a critical concern to those that experience the destructive greed and live with it all day, everyday.) But what has motivated me to write this piece is the certainty that there are far worse things out there that have driven and coerced us to accept what is at minimum detrimental, and at worse deadly.

I’ve spent the last few months studying everything from tactical reports coming out of Iraq and Massey Energy’s annual report, to issues around the petro dollar and Euro reserves. I’ve gone through a dozen Congressional Reports on a number of topics, including immigration, strategic postures, business cycles, and gang activity in the United States. Throw in some public policy issues, historical accounts of wars and politics, along with tracking Chinese investments around the world (Less than 50 miles off the Florida Keys, they are sinking a slant drilling oil rig…) and you get the picture. Just yesterday I downloaded and printed “On Point II”, the 730 page self critique that the Army has written on its performance in Iraq. I’ve managed the prologue so far. I’m functioning on four and half to five hours of sleep nightly, and I’ve worn out four highlighters.

Though I have only scratched the surface of the malaise that is destroying our nation, I have already come to few conclusions.

We have developed a political system that, in a nutshell, has created an entrenched privileged class whose only concern is the maintenance and concentration of its power. It doesn’t matter which side of the aisle they sit on, they are all part of the establishment. And the “Establishment” is corrupt. There hasn’t been a single meaningful policy initiative that has come from Washington since the mid-sixties. A list of every cabinet secretary, the congressional leadership, and military flag officers of the 20th century reads like a who’s who of America’s corporate board of directors. Does the phrase, “potential conflict of interest,” appear in their lexicon? Analysis: “Power corrupts, absolute power corrupts absolutely.”

Here are some facts. The coal that is being pulled from West Virginia is a high grade, low sulpher coal that does not go towards energy production. It is used in steel making. (Do we still make steel in this country?) So when you read how Massey is doing its part to help the energy needs of the nation they are just plain lying. The CEO of Massey, Blankenship, basically bought himself a judge, so that Massey could try building another coal scrubber right next to a school; a school that is already in danger of being scoured off its valley home by millions of gallons of toxic wastes from a massive sludge impoundment; an impoundment that is known to be leaking. Analysis: Money talks; truth and justice (and the safety of the citizenry) take a back seat.

We have an educational system that is broken. We spend an enormous sum of money to try to educate our people. The statistics are so bad that I am almost ashamed to write it down. Cities have graduation rates as low as thirty percent! We, as a people, refuse to demand a disciplined classroom, competent teachers, and a high standard of education; we allow every excuse for lack of progress to become the reality. Analysis: There is a lack of strategic vision at every level of government.

We are now “Balkanized” to a degree that will inevitably lead to the disintegration, either physical or otherwise, of the United States. Our own prejudices, coupled with open borders, shortsightedness, and greed, have caused us to fail to “Americanize” immigrants and our social policies have marginalized our own American minorities. This blindness thereby sowed the seeds of separate cultures that have culminated in the “Hoods” of any inner city, the “Muslimization” of parts of Jersey City, the “Mi Barrio” mentality in LA, and the treasonous behavior of the mayor of Brownsville, Texas. Analysis: Greed, racism, and “Political Correctness” have worked hand in hand to destroy national unity and social opportunity.

Do I need to remind you that in many cities in the United States there exist insurgent groups bent on the destruction of our nation? Insurgents just as well armed and definitely better financed than the Mahdi Army in Sadir City, Baghdad. What’s that? You weren’t aware of them? You ever hear of the Bloods and the Crips? The MS13 from El Salvador? How about our own home grown biker gangs like the Outlaws, Mongols, or Hells Angels? These are non-state actors that abide to their own code and none other. Their only aim is to impose their own governance on their turf. They want three things, just like any state or government, Power, Money, and Territory. We need a National policy that will deal with this once and for all. There is no excuse for a Nation as great as ours to have a cancer of that malignancy growing within us. Analysis: The danger is within.

Here is an interesting statistic. There are more law enforcement personnel in the state of California than there are soldiers in Iraq. So which one is more dangerous? What does that tell you?

So where does this leave us?

I bet that many of you where vaguely aware of much of this. But have you really ever given it any thought? I shudder at some of the necessary processes that will be needed to put ourselves back on track. Our government has to be broken from its self-centered, self-serving, and hereditary habits. The people of this country have to take back what is theirs, the government; the government that is rightfully of the people, by the people. And we the people have to decide what kind of nation we want to live in.

A short time ago, I was involved in a particularly heated debate, with a hunter no less, who refused to acknowledge that Mountain Top Removal is an environmental travesty. Though I refuted each and every one of his assertions, my argument held no weight, (As far as he was concerned.), due to his ignorance and inability to follow a line of inquiry to its conclusion. I am certain my logic was irrefutable, but I was not able to sway this person. Critical thinking is no longer thought to be of any use. It’s all about “gettin’ yours.”

The biggest problem is a lack of a sound education policy. Our school systems are a wreck. The system has no accountability, it is chronically underfunded, landowners are forced to pay for schools they don’t use, and there is no telling who’s actually teaching your kids or if they are even safe. I don’t know, but you would think that we would have a national educational system funded through the federal government rather than land taxes, with a minimum standard of knowledge, and a faculty of well paid professionals held to high level of accountability. They are, after all, taking care of our future. Sounds like a sound investment policy to me.

Much of what is done on the Outdoor Bloggers Summit, and all of our affiliated blogs, is in response to abuses by those that are arrogant and accustomed to abusing the good nature of those around them. As a very good friend of mine has told me, “Bad things happen, because good men fail to act.”

It is time to act. 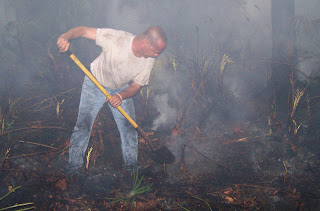 By the way, in case you all think I’ve been doing nothing but pondering weighty problems and their solutions, fret not, for a few nights ago I did entertain myself by fighting a brushfire for the better part of four hours. I’m tired as I write this, but satisfied that I’ve done my part to combat global warming, make the world safe for democracy, and possibly saving my home from a fiery demise.

I will be back and contributing regularly by the end of the month at the latest.

It has been almost a week since Holly and Kristine e-mailed me and I am just now posting this. I am going to make a real effort to put myself on a suitable deadline schedule and conduct my journalistic affairs in an appropriate fashion.