Lions in the Yard

© By Albert A Rasch
.
African Lion Hunting... In Florida
“Remember,” I thought to myself, “feed him your left arm first. Maybe one of the kids can manage to scrape him off me if things get dicey.”
Passing thought as a braced myself against the 458's recoil.

It was about 9:30 PM, and I was somewhat between awake and dead to the world, when I felt Cristal’s hands on my chest shaking me back and forth.

“Wake up!” There was urgency in her voice.

I grunted a noncommittal noise and tried to fall back into the darkness beneath my pillow.

Another more vigorous shake. “Albert! Wake Up! It’s an emergency!”

I opened one eye reluctantly. "This had better be good," I thought as I tossed the sheet and blanket to one side, and slid off the side of the bed.

My feet hit the bare floor.

Jordan was standing there, eyes as big as saucers. I didn’t give it much thought at the moment.

“Come outside, and listen carefully.” I stepped through the front door. “Now don’t go too far. Listen!” I obediently stopped and listened.

After a short while the thought of my warm bed and soft pillow was turning me back into the house. I still didn’t know why I was standing barefoot on the brick paver entry, in my Michael Jordan style boxer briefs and a well worn, comfortable T-shirt.

I took one step towards the house when I heard it.

It was the unmistakable sounds of a male African lion.

I know what you’re thinking. “Albert, come on! You expect us to believe this? What do you take us for? Dummies? We all know you live in Florida!” I know it sounds implausible. Keep reading then you can say what you want.

And as far as I could tell he was in or behind the palmetto under that damned Brazilian pepper tree I’ve been meaning to cut down. I really hate those pepper trees. It was maybe forty meters from where I was standing. The moon was almost full, casting everything in that otherworldly silver light.

Frozen in place, I looked up at Cristal and Jordan, now my eyes were as big as saucers.

“Jordan,” I hissed, “get me the .458 and a handful of 510 soft points! Move!” I make a mental note that Charlie the German Sheppard-Lab mix, and Chopper the Basset hound are both peeking out the door. I was pretty sure that Charlie was saying, “Cats are my business, but lions are yours.” Faithful dogs my rear.

Jordan hands me the Ruger #1 and a half dozen rounds of .458 ammo before scampering back to the safety of the house. Without hesitation, I drop a round down the chamber, close the action, and push the safety to off.

I’ve done a considerable amount of reading concerning Africa and its game. For instance, I know that a charging lion will cover a considerable amount of space in a flash. The mane makes his head look larger than it is, so over-shooting the brain is common, and occasionally fatal to the shooter rather than the shootee. “Remember,” I thought to myself, “feed him your left arm first. Maybe one of the kids can manage to scrape him off me if things got dicey.”

So… why am I out here in my own front yard barefoot? And in my underwear? Your guess is as good as mine. I’m glad the weather was mild though. Never being one to underestimate my own abilities, I still thought it prudent to maintain the same forty meter distance from the tree and flank the lion. I figured if he was eating one of the horses or a neighborhood kid he might be too occupied to bother with me. That would give me enough time to sort him out.

It took me about twenty minutes to cover the distance between the door and the front fence line. Step by step I crept. Balls of the feet, then gently lowered heel, carefully, quietly. Right foot over left, left foot behind right.

By the time I hit the fence, the cheeky bugger had somehow moved across the street and further back into the palmetto without me seeing him. Another twenty minutes and several dozen steps later I was standing in the dirt road less than six feet from the Brazilian pepper tree. Twice more the lion had grunted and moved further into the palmetto. But by now he seemed to have moved much, much further in; maybe a hundred meters from where I was. I couldn’t find any pug marks, but I wasn’t looking that carefully; my eyes were ahead, searching the palmetto.

I was debating what to do. For all my bravado and courage, I’m not an experienced lion hunter. Oh sure, I’ve dispatched my fair share of dangerous game… hogs, wild dogs, and rabbit, but lions in a palmetto thicket isn’t my particular specialty. Hell, I didn’t even have a tracker or two to feed him first. I was facing the palmetto, deliberating all of this when it happened.

He charged from less than five meters.

It is true that things go into slow motion when your life hangs by a thread, a single pull of the trigger.

You hear the dried palmetto leaves crackling first. Each individual leaf has its own distinct and unique snap. Your eyes move of their own volition to each and every sound, straining to catch the first bit of movement. You know you only have moments to put your sights on the one point that will guarantee you’ll be having breakfast with a fork, rather than through an intravenous tube. If, you survive. Your body subconsciously braces for the recoil, leading foot points toward the target, trailing foot digs in as your body leans forward. The sights are there, lined up, but not what you are focused on. Everything is super-tuned to that one moment, the one motion, the one and only chance you will have to live one more day. All of this in two heartbeats.

I really thought he’d be noisier. A lion has got to weigh a few hundred pounds. Why was it so light footed?

The sear was a less than a hair’s breadth from being released when TigerKat came bounding out of the palmetto. It was by that same hair’s breadth that he didn’t end up with 510 grains of copper wrapped lead splattering him throughout the countryside.

I dropped the lever on the #1 and pulled the cartridge out. I threw the Ruger over my shoulder, walked back up the road and then the drive. I didn’t care if a pride of lions burst out of the palmetto and decided to tear me into bite size morsels of Caucasian male hors d’oeuvres. TigerKat followed me, occasionally catching up and then weaving between my legs. Funny how you can walk through all sorts of stuff and not feel a thing when your heart’s beating and nothing else exists but the moment you’re in. Those pavers felt awful hard on my feet. 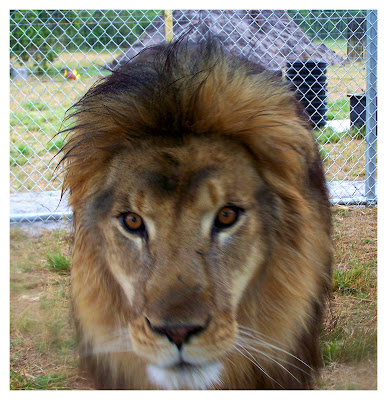 Cristal was waiting at the door, phone in hand. “Honey, you’re not going to believe this. Grandma says that a wild animal rescue organization has moved in this week. They’re on the property where the rescue dogs where. Over behind the Ramsey’s, remember?” She was pointing across the dirt road.

“I’m going back to bed.” is all I said. Sliding between the sheet and tossing the blanket back over me, I couldn't remember that bed ever feeling that uninviting. 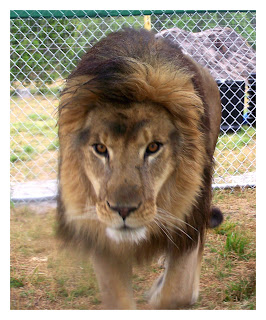 Epilogue:
Cristal and the boys went to visit on Friday. They called me excited about all the animals they saw. We went back on Saturday. My visit was twofold. I wanted to see the animals, and under what kind of conditions they were being held. I am happy to report that the animals are in great condition, including the perpetrator of Thursday’s joke on me. The accommodations are more than adequate and the plans for the facility seem very exciting. I’ll be visiting again when I have an opportunity to give a full report on the animals, the people, and the plans.