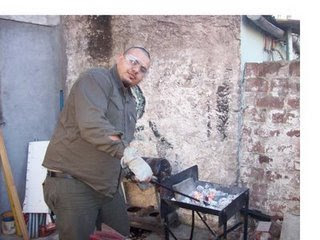 "Share in my apprenticeship in the art of iron, as it is the same as the soul, molded through strong blows..."

As I am somewhat of an amateur smith, I regularly check out the blogs and web sites of many bladesmiths. One of my favorites is Todd's Primitive Point. Todd's Blog Roll has a very good selection of both professional and amateur Bladesmiths, plus several other outdoor enthusiast's sites.

A few days ago, I bumped into Pablo Gonzalez's blog, the Apprentice Smith.

At least I'm pretty sure that is the correct translation. I could try that Babblefish thing, but I'm supposed to be fluent in Spanish. He hails from Haedo-Bsas, Argentina. Argentina is the home of the gaucho, bolas, huge hogs, red stag, and arguably some of the best bird shooting in the hemisphere.

Whenever I stop at a new Blog, I leave a note with the referring blog that brought me to them, or how I happened to bump into them. (When a new person drops by to mine, I try to leave a welcome note too.) Pablo left me such a gracious note in reply to mine, that I feel that it would be a crime not to share his blog with everyone.

If y'all don't mind, and in the name of international cooperation and friendship, drop in take a look at his work, and leave him a short note. I know that Pablo looks at many of our blogs, and is familiar with the English language.

Well, on another note, Bubby, the Mrs, and I are 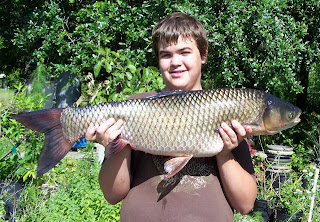 All right, y'all got me, it's actually Bubby who's taking us. He has been diligently fishing all the local ponds and lakes, and claims to have seen bass as big as the carp he brought in a few months ago. I'll be very interested in seeing these monster bass, and you can be sure that a report will be following if they are as big as Bubby sys they are. As Sten, the highly esteemed SBW blog author would say, we will be looking at the cracks in the sidewalks, for any other adventures that we might find.

Speaking of SBW check out his latest post on survival. Where he finds this priceless stuff is a mystery to me!

I was perusing some of my favorite blogs when I bumped into this slide show by Murray Carter, on my buddy Todd's Blog, Primitive Point.

It is an interesting visual description of one man's mental and physical process while blade smithing.

Another link on bladesmithing is this one: Tai's Railroad Spike Knives 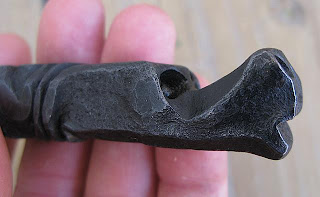 Tai has a great eye. Some of his pieces are whimsical, while others are brute practical. All of them are made with a great attention to detail, and they all cut like a knife should.

Unfortunately I won't be doing any smithing whatsoever until I figure out how to silence the hammer blows on the anvil! Though if I get the new garage organized I might get away with a little stock removal type of work.

Oh and by the way, someone stole my late 1800s blower. The Bear and his buddy set up an oil burning foundry, and when they switched to a vacuum cleaner blower, they set my hand cranked blower to one side, with every intention of bringing it right back. Well it grew legs and walked off. With scrap iron prices as high as they were, I'm pretty sure it got taken to a metals dealer; and I'm pretty sure I know who did it too. I'll catch up to him sooner or later...

Anyway, it gives me an excuse to finally build that bellows I've always wanted.

“I am very serious. Non Americans fishing in America are in danger of being killed or of being seriously injured. There are hazards like bears, alligators, stingrays, poison ivy, hunters with guns and monster sharks that can cause you harm if not fatal damage.”
The English Fly Fishing Shop
Well, I’ve read it a couple of times now. I’m pretty sure it was written as a legitimate, yet misinformed warning, maybe as an attempt to dissuade English folk from visiting our shores, but I don’t think it was a comedic piece done tongue in cheek.

I think the fellow that owns it is Craig Moore, but I’m not 100% certain so I don’t want to quote him, but the site says,

“Here in Britain there are no dangerous animals to interrupt a great days fishing.”

Yeah, but you guys have soccer hooligans! So there!

Oh by the way, they really have some beautiful flies at The English Fly Fishing Shop. They are all hand tied, and they also hand tie custom flies. So if you’re into the fly fishing hobby, stop by and take a look.

All of the information is certainly valid; you shouldn’t tow fish on a stringer, off your hip, while wade fishing in Florida, and you probably shouldn’t walk around grizzly country unprepared nor unarmed. I suppose that gators might be a concern too, but I have never had any problems with them. Except for the one in that lady’s garage. He was really fat and heavy and no one wanted to help me get him back into the lake he came from. The Mrs. and both the boys finally had to help me out on that one. Mosquitoes, now that’s a different story. I got torn to shreds while in the US Army, but a mosquito did more harm to me, hurt worse, and laid me low for a lot longer!

But I do take exception to the statement about hunters. Yes, it is true that we Americans are frequently well armed during hunting season. (It must be very intimidating to our English friends to know that I and the citizens of this great nation are as heavily armed as we are, yet more than capable of governing ourselves without bloodshed or civil unrest. Must be a lesson in there somewhere…) It is also equally true that rarely does anyone get shot by accident during hunting season. On occasion, people get shot on purpose, that’s true, but usually they got it coming to them. Well… sometimes not, but we have the Law to sort those things out.

Anyway, as far as I know, no fisherman has ever been bagged out of season. That’s if they’re even on the books as legal game. Come to think of it, I don’t even think they have a season on fishing folk, even in the western states. Furthermore, an English fly fishing sportsman would be a transient or migratory species and would require a special and expensive stamp; same for an Irish or French one. Though the French might be considered an invasive or nuisance species and might not have any legal protection from any laws, like the starling, walking catfish, and Norway rat. Don’t quote me on that, I’m no legal expert on game laws outside of Florida. Anyway I figure anyone that lives in such a damp and cool climate as the British Isles is bound to be oily and gamey. I know that sometimes I’m a little gamey on account of the dampness. So no sense in shooting one anyway.

Grizzlies are pretty placid if you give them their space, and anyway you should be fishing with a guide, who likely will carry a Ruger Redhawk in 44 magnum. I personally prefer the 45 Long Colt; more oomph at lower pressure. If they made a 46 Colt I would carry that.

Now mountain lions are little different. They go after the weak and infirm. And they really like people on mountain bikes. Now I don’t have any specifics as to which bikes they prefer, and with the new 29s coming out the whole paradigm may change, so stay tuned. You can figure that unless you’re riding a bike to your fishing spot, you should be ok.

Bull elks and moose in general, don’t usually do the cross species thing. They find it distasteful. Remember what happened to those caribou that ended up hanging out with that fat guy in the red suit? They got funny names and have to haul butt under less than tolerable conditions! Where’s the RSPCA when you need it? That’s why they don’t take any unnecessary chances with us humans.

Shuffle your feet, and stingrays won’t stick you a good one. Though if you do happen to screw up and get stuck, get some meat tenderizer on it as soon as possible.

Ask me what I think the most dangerous thing is and I will tell you what it is:

If you’re stupid, don’t go and do stuff that will get you killed. I know that stupid people don’t know any better, but if you have any question, and one of the outcomes can lead to dismemberment or worse, it would probably behoove you not to go that way. Politicians are excluded for obvious reasons. Just a little advice.

So my English friends, believe you me that fishing in the United States is much, much safer than taking a walk through Londonistan. No one is going to take out a fatwah on you because you use a fresh water fly in the briny. Just don’t get mad at us when we ask you if you are from Australia. That’s probably the worse affront we might commit, other than mangling the Queen’s English. And drink beer ice cold.

Seriously, if you really want to worry about something, worry about how contagious American Freedom is. I’ve met a lot of people from around the world. Just recently Jordan Bear made three new friends from South Africa. The thing they most remarked on was how overwhelmed they were at first, by the unbridled freedom they found. The freedom to make choices, along with the responsibility, can be intoxicating.

So don’t sweat the “dangers.” We Americans will see to it that you all don’t get into more trouble than you can handle, and we have proven over and over that we will always come to your aid, even when it hurts. And don't forget the great Winston Churchill said, "Americans will always do the right thing... After they have tried everything else!"

From English Flyfishing: Is it Really Safe to Fish America?

From the "I Really Can't Believe I'm Reading This," file comes the following.

Tourist Fly Fishermen visiting North America are in danger of being killed or seriously injured !!!
I just had to show this one to you!

PS: I'll be writing more on this one later... Still laughing!!! Elk, moose, humongous sharks, if I didn't read it myself I wouldn't have believed it!!!
AAR