Biology on the Bay: Mangroves

Tamp Bay Mangroves and their Biology!
© 2009-2012 Albert A Rasch and
The Rasch Outdoor Chronicles™
.

Biology on the Bay: Mangroves

While goofing around this weekend with Bubby and his pal Ethan, we pulled into one of the many parks that dot the Tampa Bay coastline. Unknown to many even a few miles inland, these parks often offer easy access to the bay for small boat enthusiasts, wade fishing, and in many cases offer picnic areas and scenic walks.

As the boys wandered around, I meandered over to the seawall and looked over the edge. Along with the accumulated trash and seaweed, I saw several mangrove pods, many with sprouted leaves. That’s when I got an idea. "Biology on the Bay," will be an occasional series touching on the different flora and fauna of the Tampa Bay region. 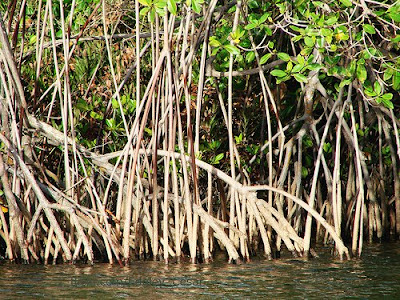 There are four different types of mangroves that inhabit the Tampa Bay estuaries: Red Mangrove, Black Mangrove, White Mangrove and the Buttonwood.

Living closest to the water, the Red Mangrove is the most common of the mangroves and the one that drops the pods that you frequently see floating by when you are fishing. Given the opportunity, a mangrove pod that gets washed up on a shoreline, or gets caught between reef rocks, will throw out roots that will quickly support it. As it grows, the Red Mangrove will produce a maze of aerial roots that prop it in place, and provide structure for all the denizens of the shallow waters. Oysters, sponges, and many types of invertebrates take refuge within the curved and intersected confines of the root system, as well as the juvenile of any number of fish. Along with the grass beds, this is the nursery of much of the Gulf Coast’s fish. 75% of all game fish, and 90% of all commercial fish use the mangrove systems for rearing their young and depend on it. 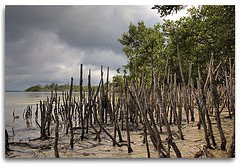 Black Mangrove Breathing Tubes
The Black Mangrove’s roots are actually an underground network of roots. Inhabiting the area nearest high tide, the Black Mangrove can be identified by the breathing tubes that pierce the tidal flats around the trees. As the Black Mangrove grows, the roots expand, putting up new breathing tubes, and as new seeds drop and germinate, they eventually growing into groves of substantial trees. The Black Mangrove though, is fighting a loosing battle against invasive species such as the Brazilian Pepper Tree, a particularly noxious and difficult to eradicate pest that can withstand brackish conditions.

The White Mangrove grows furthest inland along with the Buttonwood. Both have a more conventional root system. They can be identified from the other species by the shape of the leaves. These are the last to colonize an area, and are on the inside fringe of the mangrove community.

The three types of mangrove work jointly to stabilize shorelines throughout their range.

The ecology of the mangrove forests is fascinating. If you were to take a single sprout, plant it, and observe it over years, you would find that by itself, it would have the capability of creating not only its own ecosystem, but in essence bring life to a seemingly barren location.

When a mangrove pod takes root, it very quickly stabilizes the adjacent areas. As it grows, the aerial roots that it produces create a tangle that hold debris and detritus that gets caught up in them. As the mangrove accumulates materials, it becomes colonized by any number of invertebrates. These in turn attract other creatures. The falling leaves decompose, are consumed by these tiny creatures, and become the first link in the food chain of the bay. Soon other pods are caught up in the outlying roots of the initial mangrove and a new tree begins to grow, expanding the process.

Over time, as the accumulation increases and the number of animals upon the mangrove expands, the mangrove mangals take on the characteristics of an island. Birds nest in the canopy, carry seeds, nesting material, and leave behind plenty of droppings. Storms bring more debris that gets caught up in the ever expanding ring of aerial roots. Over decades and centuries islands are formed. 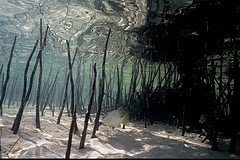 High Tide at a Black Mangrove Mangle
Mangroves create barriers that prevent erosion from both wind and water. The interconnected root systems breakup and diffuse the energy of tidal flows and storms, preventing soil, silt, and sand from getting washed away. The oysters and sponges that inhabit the system help filter runoff and do their part in keeping the Tampa Bay Estuary in its great condition.

Next time you are out on the Florida coastlines, take a closer look at the mangroves. Not only are they an interesting part of the landscape with their interesting roots and salt encrusted leaves, but they are an integral part of the life cycle of Tampa Bay.