© 2011 Albert A Rasch, Joe Laing, and
The Rasch Outdoor Chronicles™

Try as we may, we can't all raise families who share our obsessions. Fortunately, for the fisherman who can't bear a day away from the water (but whose spouse or kids might favor other pursuits), Florida doesn't require much of a compromise for anglers. Down here, it's easy to balance a vacation between water time and family fun.

For a road trip that will please every member along for the ride, it's hard to beat a tour of Florida's historic forts. Beyond the obvious historical draw, many of the state's military landmarks are now protected within the State and National Park system. That means plenty of hiking, camping, and just-plain-relaxing along the way. And best of all? Florida's strategic forts also happen to harbor some of the state's best fishing spots, from land and boat. 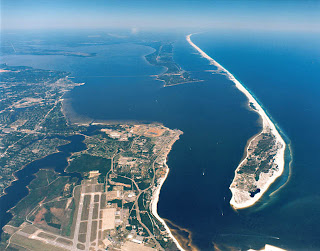 For a taste of the entire state, start in Pensacola and slowly make your way to Key West. On Pensacola Beach, make your first stop at Fort Pickens, part of the Gulf Islands National Seashore (http://www.nps.gov/guis/planyourvisit/fort-pickens.htm). In addition to this well-preserved landmark's importance during the Civil War, it's also home to a short but deep-water fishing pier. It's a great place to keep your line singing -- use cut mullet for bait, and you'll likely be helping the kids pull in small sharks and even Spanish mackerel. The grass flats to the east of the Pickens pier are a great place to stalk tailing redfish.

Fort Pickens includes a National Park campground, with plenty of amenities offered at just $20/night (http://www.nps.gov/guis/planyourvisit/campground-openings-in-florida-and-mississippi-districts.htm). And, of course, there's all the fun to be had on Pensacola Beach as well, where the 'whitest sands on earth' have (luckily) survived serious damage from last year's oil spill. It's such a nice spot to park your RV that you'll be tempted to stay, but there's a whole state left to explore. 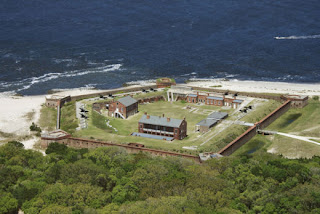 Head east down I-10 toward Jacksonville, to Fort Clinch State Park, one of the best-preserved 19th century forts in the nation (http://www.floridastateparks.org/fortclinch/) Six miles of nature trails wind through the beautiful peninsula, bordered by the Amelia River to the west, Cumberland Sound (and Georgia) to the north, and the Atlantic Ocean on the east. 53 campsites offer both privacy and proximity to the entire park, which includes a half-mile long pier on the ocean side, making deep water fishing possible without a boat. With Egans Creek curving through the park's marsh, jetties to the north, the pier, and the option of surf casting on the beach a short walk from your RV, it's hard to beat Fort Clinch as an all-around saltwater fishing destination. 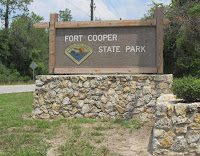 Arriving at spring-fed Lake Holathlikaha, the azure water looks much as it did in the 1830s, when U.S. soldiers rested here at Fort Cooper, between skirmishes with the Seminole Indians. Due to low water levels, fishing and swimming were temporarily restricted during early summer 2011, but with rain, that could change at any time. Paddleboats and canoes are available at the park. This is the spot to paddle out with your toddler and drop worms for bream and largemouth bass.

Although Fort Cooper offers primitive camping, to park your RV, try nearby Riverside Lodge along the Withlacoochee River (http://www.riversidelodgerv.com/). The campground includes free canoe rentals, so after a day at Fort Cooper you can still get in an evening session along the river. 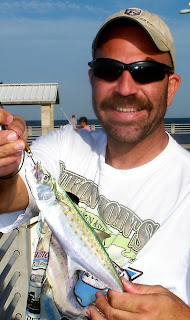 From here, head down the coast to Fort De Soto Park, situated on a truly stunning spit of land south of Tampa (http://www.fortdesoto.com/). Five interconnected keys make up De Soto, the largest park within the Pinellas County park system. Despite boasting 238 camping sites, it's a good idea to make reservations here -- this beach won Trip Advisor's Top Beach in America prize in 2009, and over 2.7 million visitors flock here each year. Still, with 1,136 acres, it's easy to find some alone time.

De Soto has two fishing piers, on both the Gulf and the bay sides, and each sells bait. There's a two-mile canoe trail, and a ferry to remote Egmont Key. Whatever your target species is, it's easy to find a superb fishing spot among these crystalline waters, where the Tocobaga Indians once harvested their own seafood bounties.

If time allows for a full tour of Florida, you'd be missing out not to journey through the Keys, arguably one of the prettiest drives in America. Fort Zachary Taylor allowed the Union to control the sea at Florida's southern tip, and has been impressively preserved as a state park (Try to visit near Halloween, when the fort is transformed into a Civil War-themed haunted house; http://www.fortzacharytaylor.com/home.html)

It's hard to beat the view when fishing from the fort, at the entrance to Key West Harbor. It's the finest place to watch a sunset in town, and you might just bring home dinner to an RV full happy, sun-kissed campers.

About the Author
Joe Laing is the Marketing Director for El Monte RV Rentals. Be sure to check out their new Professional Football (NFL) Tailgating and RV Tailgating to College Football Games pages in preparation for the upcoming seasons.
Posted by Albert A Rasch at 10/27/2011 12:10:00 AM 1 comment:

Environmentalists and Conservationists; It's How You Look at Things

The difference between Conservationists and Environmentalists...
Albert A Rasch and
The Rasch Outdoor Chronicles™
$g&m f9bd 45kd q!?5.

"The term environmentalist has been adopted by groups who don't believe that we can use natural resources and still have them available for the future."

I happened upon this interesting exchange between a young lady and Dr. James Earl Kennamer, Director of Conservation Programs for the National Wild Turkey Federation:

Anna Cromer, 16
Newtown, Ct.
A: Well, 50 years ago, there wasn't much of a difference between an environmentalist and a conservationist. People who wanted to do good things for the environment and wildlife understood that it was important to focus on the managed use of the world's natural resources, which is the definition of conservation. Hunters and non-hunters worked together to create laws to protect specific resources that were being depleted and ensured people could use renewable resources wisely and sparingly.

For example, at the turn of the 20th century, many wildlife species were in danger of becoming extinct. They were over hunted by a growing nation without game laws, and their habitat was disappearing as people needed more space. In the 1930s, hunters and anglers saw that the United States would soon be without many of the animals they enjoyed. So, they asked the government to tax them, believe it or not, so that the money they spent on firearms, ammunition, fishing gear and licenses could be used to help wildlife rebound. This was proposed as the Federal Aid in Wildlife Restoration Act, also called the Pittman-Robertson Act.
Since its adoption as law in 1937, the Pittman-Robertson Act has raised and spent more than $3.95 billion toward wildlife and habitat projects, solely funded by America's hunters and shooters. This great conservation effort has resulted in the amazing comeback of many of North America's wild species including white-tailed deer and wild turkeys.


This protectionist view is scientifically flawed for several reasons. Without human management, wildlife species become overpopulated and disease ridden, which eventually leads to plummeting populations. The same is true for forests and trees. Left unmanaged, ground litter builds up and can fuel wildfires that destroy thousands of acres of wildlife habitat. With active management, such as timber thinning, prescribed burning, legal hunting and fishing and other management tools, people can enjoy the use of our natural resources and provide the conditions for a healthier environment.

Dr. James Earl Kennamer"
Thats the answer I have been looking for!

Though he spends most of his time writing and keeping the world safe for democracy, Albert was actually a student of biology. Really. But after a stint as a lab tech performing repetitious and mind-numbing processes that a trained Capuchin monkey could do better, he never returned to the field. Rather he became a bartender. As he once said, "Hell, I was feeding mice all sorts of concoctions. At the club I did the same thing; except I got paid a lot better, and the rats where bigger." He has followed the science of QDM for many years, and fancies himself an aficionado. If you have any questions, or just want to get more information, reach him via TheRaschOutdoorChronicles(at)MSN(dot)com.
Posted by Albert A Rasch at 10/25/2011 12:10:00 AM 2 comments: