© by Albert A Rasch

“I swear that dolphin winked at me as it flipped that fish around and swallowed it!”

Quite frankly, I was cranky and in a bad mood. I could teach a cape buffalo a thing or two about foul temper. My hip felt like someone had driven a 24 penny spike through it, my ankle was stiff as sun dried raw hide, and carrying the cooler didn’t lighten my spirits much. It was late and I’m not a big fan of doing much of anything once I get home from work, unless it’s my idea, and even then it’s a toss up if I’m going to do it or not. But I had promised to take everyone out, and for better or worse here I was.

The Boo had brought his friend Ethan with him. We are very lucky that Bubby has great taste in friends. Ethan is a model child, well bred, good manners, well spoken, just a pleasure to have around. Even sweeps and cleans around our house while he’s waiting for whatever activity is scheduled next! He loves coming to our home; as y’all know we live on ten acres with horses, ducks, cats and dogs. There’s enough mud and dirt to keep an army of kids occupied. Paintball guns, (Which, believe it or not, I don’t really approve of.) bows and arrows, knives, sharpened sticks, rusty pieces of metal, ropes and all sorts of dangerous stuff, make it a kid’s paradise. At least the majority of the neighborhood kids think so.

Ethan lives in a spacious home in a lovely subdivision, with manicured lawns, a beautiful swimming pool with a Jacuzzi hot tub, and asphalt roads to ride his bicycle on. Even though the homes are twelve feet apart, the neighbors barely know each others; unless it’s to gossip about someone else. Oh, and I almost forgot, there was this really adorable kidnapping last year that put everyone’s nerves so on edge, that you could have snapped them with an overly loud sneeze. (Fortunately it all worked out; the kid managed to escape, and the Mexican Federales decided it was in their best interest to turn the kidnapper over to American authorities.) Its one of those neighborhoods were guns are evil – that is until you need one. Anyway, not to belabor the point, we love Ethan and he loves us.

So here we are, Mom, Dad, The Bear, Blake, and Ethan. The Bear sets up a couple of folding chairs for Mom and I, and I set the cooler between the two. Blake and Ethan start to set up the rods, while I get the bucket ready for them. After the preliminaries I sat my self down, and cracked the cooler open. Things were beginning to look up.

I am very fortunate that Cristal decided to marry me. Inside the cooler were sandwiches made with potato buns, gourmet mustard, real mayonnaise, Muenster cheese, Virginia ham, and prosciutto. A covered bowl had fresh lettuce, spinach, tomato, and avocado slices with a little bit of olive oil sprinkled on it; perfect fixings for a sandwich. Sitting in the ice was my favorite soda pop, Ironbeer, the national soda pop of pre-revolutionary . I guess things weren’t as bad as I first thought. I took a couple Tylenols and started to relax.

As I have told you before, Bubby throws a real good cast net. I can toss it a half dozen times before my shoulder starts to scream at the abuse. Blake will toss it for hours on end and 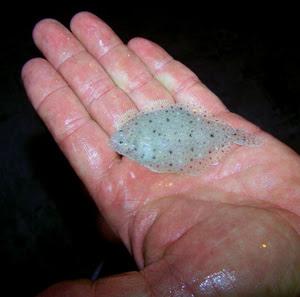 complain only when I tell him to put it up. After a couple of throws, he had a couple dozen greenies in the bucket. He threw the net one more time and when he brought it up he excitedly called me over. There in his hand was a tiny little flounder! His colors were gemlike; speckles of turquoise and emerald. After a couple of pictures we ran down to the water’s edge and gently released him.

We rigged the ten pound test rigs with a half ounce egg sinker, a small bead, swivel, and a 1/0 hook. On the incoming tide this seems like the proper balance between ease of casting and holding capability. We try different methods of hooking the shiners, through the lips, dorsal front or rear, or ventral rear. Whatever seems to work best with the bite.

Ethan had the first and most exciting bite. He had tossed his greenback out and set the rod down while he ate one of the delicious sandwiches. Moments later his rod had a pretty serious bend in it. Cristal excitedly motioned to Ethan and finally blurted out, “Ethan you have a fish on!” Ethan picked up his rod and started reeling against the drag. Blake coached him immediately. “Hold your rod up! Don’t reel in against the drag! Let the rod do the work!” Who says kids don’t listen to their parents!

Blake was on the rails looking into the dark waters and excitedly called out. “He’s got a shark!” Well I figured I should mosey on down and take a look, so putting my sandwich down, I got up and made my way to the boys. A few steps later I was by their side and looking over the edge but the shark had sounded. At that moment Ethan’s line parted and he stood there, rod in hand and the line twisting in the breeze. Blake let out an, “AAaarghh...”

I thought that Ethan would be disappointed; if he was, he didn’t show it. He and Blake opened the tackle box and were re-rigging the rod.

Bubby had a rod out with a ventrally hooked greenie. After Ethan’s shark though, we had kind of lost track of it. It was the squealing drag that pulled all of our eyes to it. Ethan hollered, “Blake! Your rod!” Bubby was on it quick. 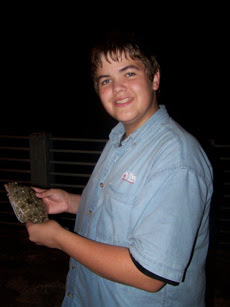 He practiced what he preached. The rod was high and he let the drag do its work. The monofilament was stretched taut and cut through the surface of the water. Before long he brought in a small flounder. Another beautiful specimen with brilliant hues of greens, browns, and blues

After that we caught a couple of lizardfish. Those are some ugly little fish. I’ll have to get you all some pics. They are all mouth, with sharp pointy teeth, and an appetite for fingers. They don’t bite hard, but they are aggressive. And they really put on a good fight for their diminutive size.

There were a few ladyfish in the mix. They’re sleek and strong, a big one will make you swear you have a jack or permit on the line. With runs like a bonefish and leaps like tarpon, they are a great sporty fish to catch. They are inedible, due to a large number of bones, but I have seen them in the market. I suppose the commercial fishermen don’t care what they pull out of the oceans as long as someone buys it. It can be pretty bad sometimes.

We had another fascinating experience at this point. Cristal had reeled in a good sized ladyfish, maybe sixteen inches long. I’m in charge of unhooking all of Mom’s fish so I grabbed it behind the pecs, and gently removed the hook. Mom gave it a good look and as we normally do, I pointed it nose down, and let it go. Mom and I were looking over the rail as the fish dropped, when out of nowhere, a large dolphin breaks the surface two or three feet from where the fish is going to hit. That ladyfish must have noticed too, because as it hit the water it thrust itself across the top of the water in a remarkable leap. It was almost too fast to follow. Somehow though, the dolphin got under it, and before we knew what happened, the ladyfish was in the dolphin’s mouth, neatly held in its toothy grin! We stared in disbelief. I turned to Cristal and said, “Did you see that!” She was as stunned as I. It was awesome. I swear that dolphin winked at me as it flipped that fish around and swallowed it!

There are usually some South East Asian families out on the pier. This evening was no exception. Invariably quiet, they mind their own business, and usually out fish everyone else. I watched them with some interest as they bucketed anything that they reeled in. From ladyfish to large grunts, they all were scaled, gutted and put in a cooler. I’m sure it all ends up in some delicious seafood dish.

As it got later the bite tapered off. We sat around and talked, or watched the skimmer birds do their thing. After a while the jaws started cracking and Mom and I decided it was time to pack up. We did everything in reverse order, and before long the three boys were sprawled over each others in the backseat, dozing off as we drove back home.

All in all it was another great evening with the family. The boys got to catch a few fish, Mom got to do what she does best, and I ended up feeling pretty good after all!