Sporting Classics Presents: A Million to One - H&N English Shotguns 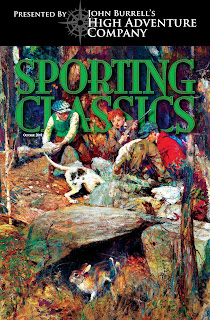 The Rasch Outdoor Chronicles, in association with Bernard and Associates and High Adventure Company, proudly presents Sporting Classics. Widely recognized as the premier outdoor magazine, with award-winning graphics and the country's top writers, Sporting Classics focuses on the best hunting and fishing throughout the world and finest outdoor fiction. Whether it is wingshooting grouse on the Scottish Highlands, stopping Cape Buffalo on the plains of Tanzania, or landing delicate Rainbow Trout on a 2 weight bamboo fly rod, Sporting Classics and its stable of renowned authors covers it with class and finesse.
The Rasch Outdoor Chronicles has been chosen as one of the few Outdoor Bloggers to share content from the most respected and best known magazine in the outdoor community!


Please enjoy the following advance publication. I would like to thank the Bernard and Associates team, High Adventure Company, and Sporting Classics for choosing The Rasch Outdoor Chronicles  as a partner in their endeavours!
*** ** ***
A Million to One
The city of London is big. Really big. Over seven million residents. Nearly 12,000 folks per square mile. Like New York City, it’s wide-open, sizzling, rocking and rolling around-the-clock. On the other hand, Kathy and I are not big-city types. Got a stoplight and a Wal-Mart? That’s big enough city for us.

After a couple of days visiting midtown gunshops, watching The Queen’s Cavalry, staring at Buckingham Palace, shopping at Harrod’s and dodging vehicles driving on the wrong side of the road (I was hit by a bicycle and was called several names), we were ready for some fresh scenery. So when Andrew Harvison, owner of Holloway & Naughton and Premier English Shotguns Ltd., invited us out to the English countryside for the day, we were happy to oblige.

Tuesday morning, after a quick bite at the Cartref House Bed and Breakfast in London, we grabbed a cab to Marylebone Station to catch the train out to High Wycombe about 30 miles northwest of the city. Along the way we watched the landscape change from urban sprawl to quaint hamlets, rolling pastures, forests, hedgerows and classic English-style farmhouses. This was more our cup of tea.

When the train stopped at High Wycombe station, our host greeted us warmly before driving us out to West Wycombe Park where his gun-finishing work is done.

Well-dressed, well-spoken and well-mannered, Andrew Harvison is the classic English gentleman, but with an even more relaxed demeanor. That’s attributable to his preference for the country life as opposed to the fast pace of “The Square Mile.” In fact, no portion of the Holloway and Naughton operation is located in London, but every gun is 100-percent English made. That was one of Harvison’s goals when he rekindled the firm’s trademark. 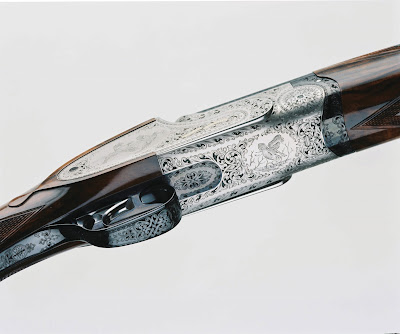 “We made up our mind to design our own products and then take them to the market,” he said as we rode through the countryside toward West Wycombe,” rather than jumping on the bandwagon of copying someone else’s design, or indeed, using somebody else’s components.

“We employ twelve people total,” Harvison added. “Our engineering base is in Leicestershire, where we employ four craftsmen who design and build components. The parts are then sent to outworkers. Barrels are put together with actions at one place, then on to stockers and engravers.

“The outworkers then send the components back to us, and after all the bearing surfaces and other fine details are inspected, the guns are assembled and we add the finishing touches. The entire process can take up to two years per gun, though we are seeking ways to shorten that time-frame.”

One of Andrew’s favorite workshops is the one tucked away at West Wycombe Park. 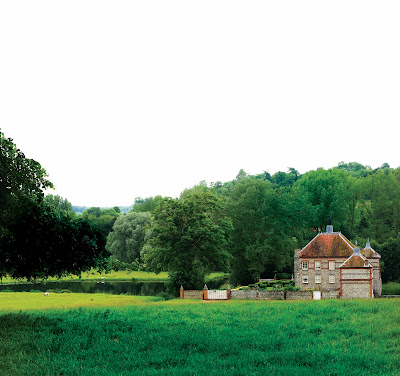 “You’ll enjoy this,” he told us as we traveled the paved drive that climbs up toward the estate. From that vantage point we could take in the main manor house overlooking a serene lake and acres of verdant pasture.

“This is very, very famous,” Harvison said. “It’s Westwood Hall, the home of Sir Edward Dashwood. It’s been in the family since the fifteenth century. These people made a fortune out of tea and the old empire. This whole estate is just absolutely incredible.”

Pointing to the lake, Harvison explained that big parties held there during the 19th century became wild affairs.

“Attendees such as baronets and chancellors built small pirate ships, which they sailed around the lake,” he said. “But sailing was just part of the fun. They had live cannons and would actually fire cannonballs at one another . . . they held sea battles.”

Quartered in an 18th century church building a short walk from the main house is Harvison’s finishing shop.
Inside, the small building was crowded with tools, blueprints and work tables. The walls were decorated with various European mounts from the estate, including roebuck and the muntjac, a smallish deer with short, spiked horns and two-inch fangs. 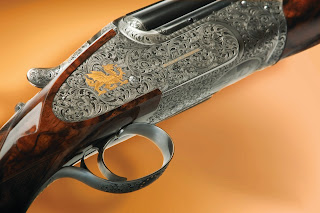 As we watched a gunsmith at work, Harvison pointed out that the firm produced 12 guns last year – a fairly lofty number for such a small operation. “We’re different,” he said, “because we do everything in a modular sense. Unlike the others, we start with a clean bit of paper on every design. From the beginning, we sat down and designed a gun, then we designed another one and another one and so on. No one has done it that way since before the Second World War.”

The Holloway and Naughton name precedes Harvison’s ownership by more than a century. In fact, the name has been highly regarded in British gunmaking since the early 19th century. Thomas Naughton started building guns in Birmingham in the mid-1800s and by 1888 he was working for James Carr on St. Mary’s Row. At that time, George Holloway, a purveyor of fine guns, was also interested in gunmaking and saw Naughton as the ideal craftsman. 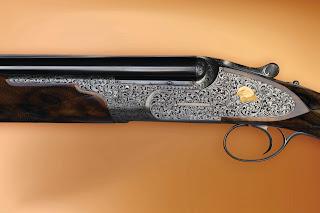 In 1909 the name Holloway & Naughton was born. Prior to World War II about 90,000 Holloway & Naughton branded firearms were made, with many sold in the U.S., India, Australia as well as Britain.
During the war, production ceased as the workforce was called to war. The factory was annihilated in a bombing raid on Birmingham, and all plans, blueprints, machinery and records were lost. During the following 40 years only a few boxlock guns were made.

In the early 1990s Harvison resurrected not only the brand, but also the high standards set by the early Holloway & Naughton craftsmen. Today, with his unwavering attention to every detail, be it a shotgun or rifle, Andrew Harvison is being taken very seriously in the gun world. 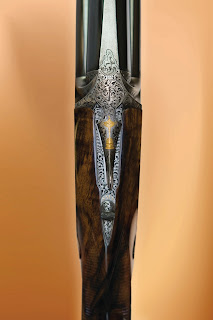 Harvison developed a love of shooting at an early age and by 1967, he was the owner of his own shooting ground. Over the next 17 years he developed two of the foremost commercial shooting centers in the UK, which hosted many regional and national events. Harvison represented his country for nearly 20 years at sporting clays, skeet and trap competitions. He captained the England skeet team and collected a host of shooting honors, including the British Open Sporting Championship and English Skeet titles on two consecutive occasions.

After visiting West Wycombe, we drove out to the E.J. Churchill shooting ground. Just in time for lunch, we enjoyed a delicious meal of prawn baguettes served in the dining room. Afterward Harvison led us through the Churchill shop to a 12-gauge Holloway & Naughton Britannia displayed on the wall.

“Would you care to shoot some sporting clays with the Britannia?” he asked. I thought about it for roughly one-thousandth of a second before answering in the affirmative. Andrew broke the sidelock over-and-under, looked down the glistening barrels, then passed it to me. I studied the $65,000 shotgun in my hands before gently draping it over my arm. The stock and forearm were cut from the finest Turkish walnut. Smooth, handsome and shaped for shooting, they complemented the English scrolled action and top-grade barrels. 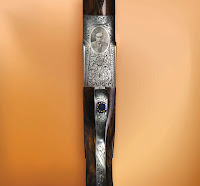 Soon, Harvison, Max Jellicoe, one of Churchill’s many shooting instructors, Kathy and I were walking along lush green pathways to the course to give the Britannia a try. Jellicoe and Harvison had previously run several rounds through the gun, and had no doubts about its performance. They wanted to see how this American, who swore he was only an average shooter, would handle it.

The first thing I noticed was the Britannia’s balance and how it mounted perfectly to my shoulder and eye. With a few tips from the two instructors nearby, my shooting was, well, simply smashing! If I could borrow the Britannia, or pay for it in itsy-bitsy installments, I could finally be a hotshot back in the New World. But no deal. 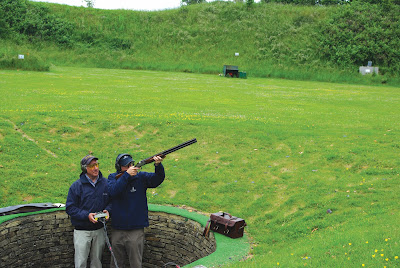 Later, in the clubhouse, Harvison explained that the firm also produces the Britannia Field Model, which is similarly well-balanced and fast-handling with its slim stock and fore-end, light barrels and fine rib. The gun is engraved with traditional English style scroll. 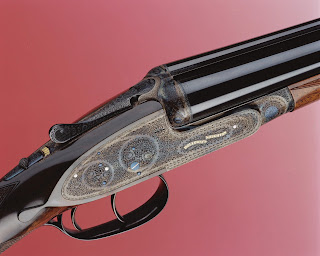 Driving back to the station for our return to London, I asked Harvison what he considered his greatest achievement at Holloway & Naughton.
“To have designed every single part, every single component,” he replied . . . “to make something as beautiful as this from scratch, has been a monstrous achievement. To have accomplished this as an independent gunmaker is just a million to one.”
To find out more about Holloway & Naughton, visit http://www.hollowaynaughton.co.uk/.
*** ** ***
I hope that you have enjoyed this installment of Sporting Classics!
Best Regards,
Albert A Rasch™
Member:Kandahar Tent Club
The Hunt Continues...

Rick at Whitetail Woods has a great reminder for all of us deer hunters.

Stop by and say hello! Great pictures too I might add!

Email ThisBlogThis!Share to TwitterShare to FacebookShare to Pinterest
Labels: Blogs of Note

Florida Matters: News from the FWC

I have a press releases that I would like to share with you! The Florida Fish and Wildlife Conservation Commission continues in its efforts to provide Florida Veterans with opportunities to fish and hunt!

"The FWC wishes to thank our service men and women for the contributions they have made to our freedom," Barreto said. "By partnering with the WWP, we are helping these vets experience some of the best bass fishing in the world."

The FWC's Division of Freshwater Fisheries Management (DFFM) provided the promotional packages, which include tackle samples, fishing publications and discount coupons. Additionally, the veterans received a free "Get Outdoors Florida!" t-shirt. "Get Outdoors Florida!" is an ongoing campaign highlighting the health and social benefits of fishing and other types of nature-based recreation.

Not only are the fishing trips fun, they're also successful. In June, a pair of Iraqi war veterans, guided by a professional bass angler, caught more than 60 bass during their fishing expedition on Lake Okeechobee.

The trips are sponsored by SMI Cold Therapy of Butler, Pa., a manufacturer of cold-therapy products and services for post-operative patient care in hospitals and surgery centers, and Bassonline.com, Florida's largest freshwater guide service and outfitter for bass fishing on Florida lakes, canals and rivers.