Sorry I missed yesterday. I actually walked until closing without a break, and at that, I didn't realize what time it was when Phillip called me. It is that engrossing.

I did the tactical/homeland security/law enforcement section for the better part of the day. The upsurge in interest in anything related to the "tactical world" is nothing short of amazing. There are an untold number of vendors that specialize in clothing and body armor. You can't count the number of rig, pack, and sling manufacturers. I won't even get into the weapons systems that are being promoted by both major and minor armament dealers. I have seen, handled, and disassembled more suppressors today, than in my whole life previous to the Shot Show.

Among the new items on display, I had the opportunity to talk to the folks at CMMG out of Fayette, MO. They have a great 22 rimfire conversion for the AR15 platform, and they were gracious enough to give me one. I'll be running it through its paces this coming weeks and you can expect a full report on it. They also manufacture a replacement 30 round magazine with a twisted, ceramic coated wire spring. if it operates as well as it looks, it should be a winner.

On the clothing front, the fellows at Darn Tough gave me some beautiful socks. Made of 100% Merino wool, with a zero friction heel, and made here in the USA, they have a lifetime guarantee and feel real good on my feet. I'll let you all know how they fare!

There's lots more to tell, and I'll be sharing it all with you in the weeks ahead. There are knives, weapons systems, sporting arms, handguns, and accessories that we have to talk about! I'll need a couple of days to decompress, but expect the first installment of "What I Learned at the Shot Show," on Wednesday. In the meantime I'll be walking, talking, and learning more!

Well its about 13:30 hrs and I have only made it around the perimeter of the Shot Show. That means I have not even entered the Show floor yet today, just the periphery!

It's phenomenal! Some of these booths must cost half a king's ransom to put together. As I mentioned briefly yesterday, the Otis Technology display is a multi level, polished steel, scaffold system. 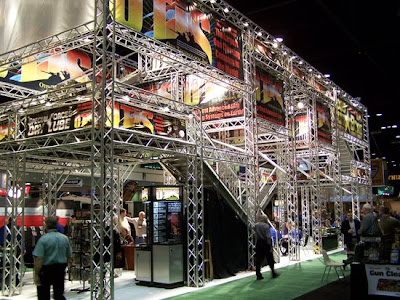 The folks at Otis are all very friendly, and quite a few women, sportswomen I might add, are in positions of authority. I didn't meet anyone that didn't know their business inside and out there! As a matter of fact we will be reviewing some of their products in the coming months, so keep an eye out for them.

I've taken lots of pictures, talked to dozens of people, and I have a bag full of swag: Catalogs, press kits, CDs, and stuff.

I spent a good bit of time at the Connecticut Firearms booth and fondled the round framed 16 side by side I've been wanting since they introduced it. It's a gorgeous piece of the gunmaker's craft. They have another firearm that I can't wait to tell you about, it is a shame though that I didn't have an opportunity to fire it!

There are a lot of black rifle vendors plus the accessories for them. They have a whole defense oriented section with all the bells and whistles: supressors, entry tools, body armor, ropes, video, and all manner of esoteria.

Hopefully after my freakin' phone gets charged ( THAT will be a post in and of itself...), I'll hit the first aisle and see what there is to see.

Having a great time! Yesterday was Media Day at the Range. Lots of new stuff. Tactical is really big, there is even a sec-ops section where the media can't (or shouldn't) go!

and a couple more I don't remember right now.

The convention center is huge! It is well over nine miles of aisles. I'll be wearing out these boots before it's all over! There are even a couple of log cabins in the hall! And OTIS has a three level polished steel scaffold system up! It's awesome.

I believe that there are over 1800 vendors displaying items, from frilly girly stuff to Dillon Mini-Guns! I found 40mm grenade launchers and marshmellow popguns.

I'll be a little more detailed next time I get on!

It's Late and I'm getting tired.

I still haven't ironed my shirts and trousers!
My dog tags and doo rag are clean and ready.
The Jeep is packed and my food and drinks are in the fridge.
I have an assortment of cigars for the fellows.
Two pairs of boots, three pair of socks are ready.
I'm bringing a fishing rod just in case.

I am ready for the Shot Show!

Tomorrow, I'll be hitting the Media Day at the Range first. That should be an all day affair of new firearms and equipment introductions. I don't even know for sure what will be going on as this is my first time. But I have read about it over the years and I'll have plenty to talk about I am sure!

Then it's dinner at Del Frisco's Steak and Lobster with Michael Riddle of Native Hunt, Phillip Loughlin of The Hog Blog, Jesse James of Jesse's Hunting and Outdoors. Much to our disappointment, Holly Heyser of Norcal Cazadora will not be able to attend due to an inflamed and then excised appendix. I'm especially bummed as Holly is my mentor in my writing schenanigans and I respect and admire her very much. She and Kristine at Outdoor Bloggers Summit pretty much keep me on the straight and narrow! I would have pushed her wheelchair around if she had decided to attend!

I've contacted a few other bloggers that I thought might attend too. We will see if any can make it.

Thursday thru Sunday are on the show floor and I'll be walking the lugs off my boots looking at everything and talking to everyone!

I'll be posting daily if I can. The media area has computers available, so with luck I'll be able to get in a few posts!

If anyone would like me to look into anything, get them literature, or what have you, let me know with a comment and I'll try to get it for you.

Just a picture update on this weekend.

I'm getting ready for the Shot Show and it seems that the more I do, the more is left to do!


We headed out to Long Boat Key Pass this weekend. Not much was caught, but we all had a good time! 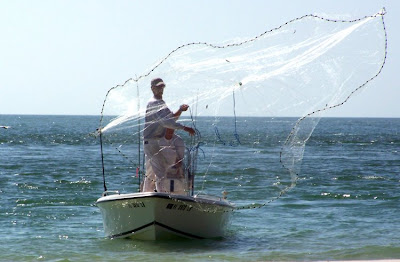 These fellows where catching some bait a few meters off the shore line.
Nice throw!

The mullet netters were out in force. They have to use cast nets. Since the net ban the mullet stocks have made a dramatic comeback. I saw some that must have been 16-18 inches long.

Aaron, one of Blake's friends. 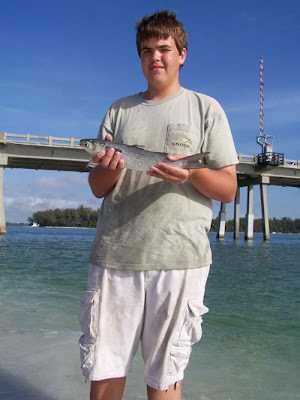 Blake's catch of the day, a nice mullet!
This one would be just about right for spring time snook fishing during the full moon.

Well, Otto had time to mull his decision over. I wasn't in any hurry to leave, and Mike was working, if you can call it that.

"Good choice!" Exclaimed Mike in his usual over exuberant way. Did I note a hint of self congratulatory smugness in his voice?

Glancing at Mike with some suspicion, I turned to Otto and asked, "That's a great choice! Now tell me, why did you pick the Mossberg?" I wanted to hear his logic for choosing it, I wanted to know if he was listening.

Otto ticked off three facts on his fingers. "One: It's a handy rifle for Florida habitat. Two: I can use the 30/30 on anything I might decide to hunt for. Three: It's affordable, and so is the ammo, so that means I can practice more."

"Good sound reasoning!" I said as a slapped him on his back; he was listening. "Mike, hand the man his rifle will you?" Mike was already reaching for it, but I thought a little motivating from me might make it happen quicker.

“So Otto, those are good reasons for picking the Mossberg leveraction, but now I want to know why you didn't decide to get the Weatherby, the H&R, or either of the Marlins."

"Well sir," he started, "I'm not sure I want to risk it all on one shot, so that pretty much ruled out the single shots for me. The price is right on the H&Rs but I'm not really liking them that much."

I can’t disagree with him too much one the aesthetics. I have a sixties vintage 10 gauge slug gun whose bluing rivals that of any other gun I have, and the stock is as pretty as any. She’s plain, but pretty.

"Now, I like the Weatherby, and if I had more money, I probably would have chosen it. But I really want to be able to practice so I'll need the money for the ammo. That and I'll need other stuff too." 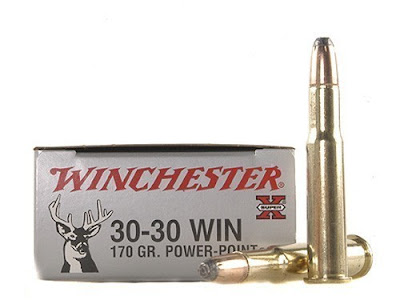 "I really liked the Marlins, don't get me wrong, but I don't think I'm ready for the 45/70. What you said about respecting the game, I understand what you mean and I don’t want to be a bad shot and make a mistake while I’m out there. I don't reload my own ammo; so I can't make the 45 Colt ammunition. If I understood you correctly the stock factory ammo isn’t best for hunting hogs, and that Corbon is pretty expensive stuff. And the truth is, I like the way the Mossberg feels in my hand. That pretty much did it for me."

"That is pretty good reasoning." I responded. "Mike, what do you think? Has he got the smarts to outwit a big boar hog?"

"I think so." He replied and then added, "If he practices, stays honest to himself and the game, he'll do fine. You think you can do it kid?"

"Yes sir I sure can!" Came Otto's sincere reply.

"Alright, there's only one thing left for you to do, and that's to schedule some range time with Mike here." I turned to Mike, "Can you get Mr. Broward to help Otto out?" Mr Broward is an older gentleman who runs the range. He's real old school, and enjoys helping out younger folk getting started. He's half deaf so it's always a lot of fun when he's presiding over the range.

"I'll make sure he's here when Otto comes in." Mike’s as good as gold when it comes to getting someone started right.

"That'll be great." I added, "Otto, Mr Broward is an old cuss who will teach you more in an hour of range time, than most people can learn in a year of shooting, so mind your manners and pay attention."

Well I felt pretty good on this one. I’ve had them when they wouldn’t listen to reason, and get something completely ill suited for their skill level and the quarry they where after. Mike has to tread a thin line between pleasing the customer and advising.

If only more kids were as amenable as Otto was!