Saturday Blog Rodeo 08/30/10
Well I'll be darned! It's been a while since we have had a rodeo,and I am still here in Afghanistan, still in one piece, and still sucking dust and eating dirt!No one has yet to answer that one overriding question I have had for a long time: How does Al Gore find the time to keep all this stuff coming up around his Internet?

Anyway, once again I bring to you the Blogs, posts, and commentaries that I found most entertaining and informative! And believe it or not, none of it has anything to do with Brett Favre, Ritz Crackers, or the Liberal Left's failure to use their heads.

First up on todays Rodeo is G2G Extreme by ... Emily's husband. Ok, so I couldn't figure out his name, but I did figure out that he's got the skinny on hunting, and hunting well! Good stories with great tips, and after action equipment reviews. "I am very impressed with the Ox pack for several reasons and yet I wish I could make a few changes to the design. I've listed my likes and dislikes below..." Nicely done. 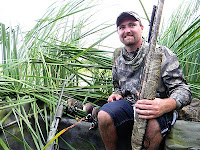 Next up is a fellow Floridian, Ian Nance. Ian is a "lifelong resident of Central Florida with a passion for hunting just about anything. He is a Mossy Oak Regional ProStaffer and proud member of NWTF and DU." His Blog, The Wild Life, is one of my favorites. He covers a lot of territory from fishing to boating, camping and goodtimes!

I am working on this and I get the call. I am off to a FOB closer to Pakistan... If I can, I will try to update this, but if it's Saturday, and you're reading this, I'm probably in over my head...

Sartorial: The Word of the Day

You are going to need to know this word... Trust me...

Adjective: Of or relating to tailoring, clothes, or style of dress: "sartorial elegance"

Just keep it in the back of your head.


Afghanistan Always Wins...
Or Does It?
I know that title doesn't sound all that appealing, but it really means a lot to me and to a good friend of mine.

Last year while dodging rockets and eating dust at Kandahar Air Field, I made a friend, a little Afghan waif that I called "Snot Nose."

He was a heck of a salesman, always selling me trinkets at twice the price he charged anyone else. His older brother ran the trinket selling part of the stall, while their father sold and traded the Chinese/Pakistani machine woven, "Handmade Afghan" carpets, to unsuspecting and gullible westerners. 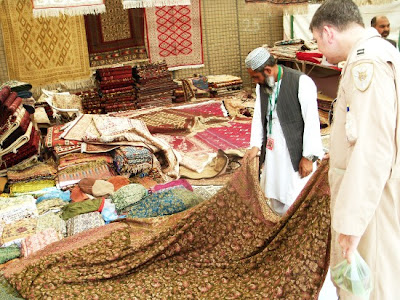 Captain Know-it-All shops for a carpet
He was named Snot Nose because his nose was always running; a viscus, sticky green, stream of mucus constantly oozed from his aquiline nose.

I took a particular liking to him even in spite of his runny nose. I would show up with Kleenex tissues, hand sanitizer, and antiseptic wipes. I would make him clean himself up before I would let him hustle me out of a couple of bucks. Usually I would bring a bag with canned food and hard candies, pencils and notepads. I especially was on the lookout for protein bars which I would collect and bring him. My terp tried to explain to his over stuffed father that he should see to it that Snots ate one or two a day. I never could determine how old he was; my guess was six or seven years. But if he weighed 40 pounds, that would be a generous estimate.

It was winter time then, and he seemed to get progressively worse with each week passing. I tried to figure out a way to spirit him out for a while, and have him seen by the American hospital, but it was impossible to remove him from the restricted area.

The best I could do was bring a couple of bottles of Musinex, and through an interpretor, explain to his camel trading father, how to dose the poor under-weight kid.

A week later the authorities closed the bazaar because of security concerns. The talibannanas had infiltrated the vendors, (Really? NATO figured that out all on its own?), and there where rumors that the Bazaar would be hit by suicide bombers.

Shortly thereafter I left the KAF theater and went back to Bagram...

I have often wondered what might have happened to little Snot Nose. I figured he never made it to through the harsh Afghan winter where death stalks the wicked and saintly with equal fervor. A cold turns into bronchitis, bronchitis turns into pneumonia. Pneumonia into the cruel, cold hand of death, stealing yet another life away.

It's a harsh land, an unforgiving land. One little boy more or less won't make a damned bit of difference to it. Afghanistan will always exact its toll, collect its due, in blood many times, from every man, woman, and child. Its mountains will swallow every invader, the very dust filled air will choke the life out of them. Its inhabitants will withdraw further into their hate filled existence, and lay the blame at the feet of everyone and everything - except themselves.

One child more or less, just doesn't matter to them; seemingly to anyone.

Except that it does matter to me, it bothers me a whole lot.

*** *** ***
I'm back in KAF, and the Bazaar is open again, but I really had no reason to go. But I thought I would walk through it and see if I could replace the shemaghs that were stolen from my tent in Bagram.

I see the familiar faces of the vendors like the scarf and shemagh man, the fat, greasy coward that took a Chupa Chup lollipop from a child last year, (Remind me to tell you that story...) and others. 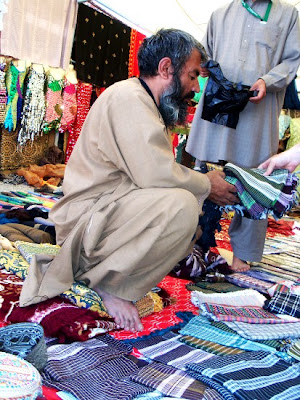 Imagine my surprise when out of a crowd I see none other than: 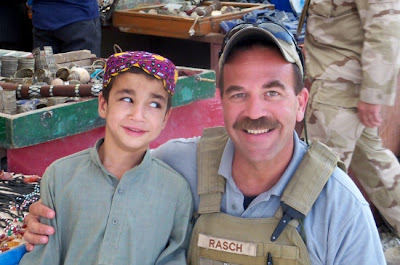 Snot Nose!
I walked over to him and leaned over to look him over carefully.

His little hand drifts up to my face, a finger carefully pushes my sunglasses up onto my forehead.

He says: "Albort." (He has always mispronounced my name.)

I'll be damned, it's him all right!

His father must be doing well. Snots had on a very nifty Man Jammy outfit that matched his older brother's. It was clean and well kept, and the little fellow was at least a couple of inches taller, clean and healthy. No boogers on his face either, just a smile! He suckered me for yet another bracelet, and I was happy to get taken.

Tough as nails these Afghans are.