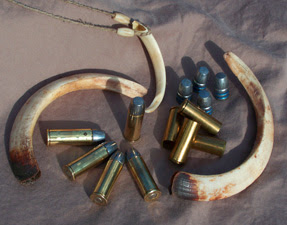 (Editors Note: This occurred several years ago. Unfortunately I have no pictures of this adventure. I do have the skull of the boar; it is one of my most treasured trophies. My attempts to reunite with Jim and Mike have been, so far unsuccessful…)

It was bound to happen sooner or later...

When you hunt as I like to, at close quarters, purposely putting your life in danger, you are assured to have a hair graying, shave a few years off your life, bladder weakening experience.

It had started, innocently enough, with a half-breed Russian boar that was given to me by, a good ol' boy who was cousin, to the sister of the wife, of the guy who fixes my friend Big Duke's car. At least that's how I understood it. Big Duke is a free association type of guy, with an endless stream of consciousness conversation that anesthetizes you as it washes over you. Somewhere out of that particular current that morning, I picked up "mean old hog" and "cutters the size of butcher's knives". My interest piqued, I listen more intently but he had gone on to the "Butcher of Seville" which must had been a sequel to the "Barber of Seville", which, I am glad to say, I must have missed when it came through town. Interrupting and dragging him back to the hog part of the conversation, I found out that someone, somewhere wanted to get rid of a particularly nasty boar hog that they had somehow acquired.