The "Beats Me What Day This Is" Blog Rodeo! 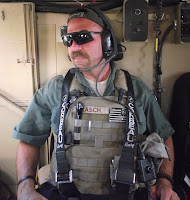 That's right folks, another Rodeo from the depth of the Afghan Abyss, were indoor plumbing is a luxury, and doom is an equal opportunity destroyer. Welcome to the latest installment of the now, not only infamous, but de rigueur for the erudite and "in the know" outdoor crowd, of the Chronicles' Saturday Blog Rodeo! As you all are amply aware, I plumb the depth and breadth of the blogosphere searching for and commenting upon the diverse outdoor activities, (And some indoor ones too!), bringing you, my faithful and ever patient readers more blogs to read and expand not only your minds, but horizons. So with that said let's get into this week's way off version of the Saturday Blog Rodeo! 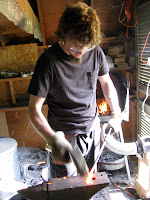 The Blacksmith Blog is written by Andrew the Blacksmith, a young and aspiring ummm, blacksmith! His blog is full of basic information in addition to pictorials of his work. Not only is he an artist smith, but he works a little arc welder magic in too. Again he uses it as an adjunct to the more old school hand forged methods he also enjoys.  I want to say, from reading his blog, that his interests may very well lie in the realm of the whimsical and imaginative. He is working in a smaller scale at this moment, with imaginative symbols and animals made of discarded and found scrap steel, but I can imagine him going to large scale and beyond as his skills and vision increase! I think he is going to be another person that we will be following for some time as he progresses and learns his chosen craft! 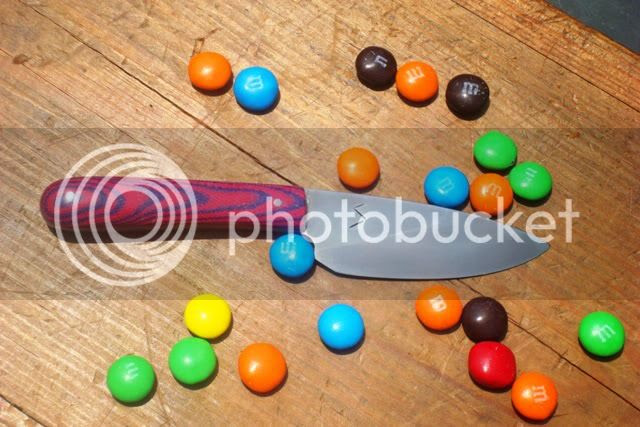 Eagle Eye Forge Bladesmith is Stephen Stumbo a 17 years old amateur blacksmith/bladesmith. He has been blacksmithing for 2 years, and working on blades for 1 year. Take a look at that knife above and tell me what you think he will be capable of in a few more years! His favorite items to create are knives; the one above a skinner he made for his sister! He prefers old school hammer and forge, but he is equally comfortable with modern methods and techniques. His current forge is homemade: a brake drum, some piping, a few cinder blocks and a a discarded hair dryer and... duct tape. Now be that as it may, look at his work here is another young man to be on the lookout for! By the way Stephen, how do you make micarta? 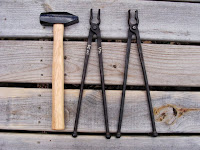 DIY Blacksmithing is a great little blog from Terran "Earthman" Marks, a lumberjacking sort of fellow who enjoys fighting wildfires, painting landscapes and moving metal. He has some great concepts and ideas that he is promoting, in particular commentaries on smithing on the cheap. He hasn't had very much time to update his blog, but I think he will have great info to share as time permits. 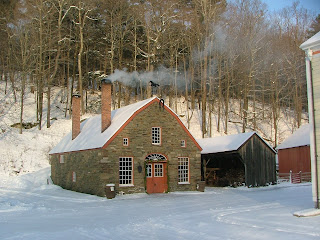 The Blacksmith's Shop at The Farmers Museum 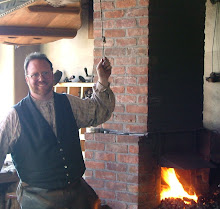 I've always enjoyed blacksmithing, though what I do might not necessarily pass for blacksmithing by definition. More like banging on red hot metal for no apparent reason. Now Steve Kellog is a blacksmith.

I bumped into his blog while searching for methods and techniques for forging mainsprings in flintlock locks. Steve's blog Rural Blacksmith is a veritable treasure trove of blacksmithing information! Steve has been blacksmithing for 15 years, and at The Farmers' Museum he teaches classes, present blacksmithing demonstrations on a daily basis, make historically accurate tools and hardware, and researches life and work in the 19th century.

An interesting project that Steve has been part of is a brace of Scottish steel and iron pistols in the Pitcairn style.


The project is inspired by the surviving pistols of British Marine Major John Pitcairn. He is the officer that ended up commanding the troops launching the raids on Lexington and Concord. Those are regarded as the first battles of our war for independence, and the first shot fired in anger is referred to as the “Shot heard around the world”. That shot was attributed by some as having been fired by Maj. Pitcarn from one of these pistols.

Check out Steve's blog; it is a very good one!

As is usual, I am running out of time, and I am off to yet more adventures... or drudgery which is usually the case. Stop by and visit the blogs I mentioned, And let them know you saw them here!

Warlords and Smugglers! Spin Boldak: Crossroads to Pakistan and Beyond!
© 2011 Albert A Rasch and
The Rasch Outdoor Chronicles™
$g&m f9bd 45kd q!?5.

(Written 13 April 2011)
Holy Smokes! If I could tell you all a quarter of what I've experienced in the last couple of days, you wouldn't believe it! Seriously, I was really going to diminish the amount of Afghanistan material I post, but seriously, you just can't make this stuff up!

I'm currently at Spin Boldak, helping out with the transition of site managers. Spin-B, as it is affectionately called, is 6 klicks from the Pakistan border, and the town nearby is the main crossroad between Pakistan and Afghanistan. Gem and opium smugglers, white robed warlords, heavily armed black masked operators, threadbare goat-herders, and weary truckers, all converge from all points of the compass in this small area. Whether it's hash and opium from the interior, explosives and human cargo from Pakistan, exotic spices and homegrown rice, or stolen coalition supplies going in either direction, the majority of it flows, untaxed by the governments on either side, through this dusty and chaotic border town.

The local strongman and warlord, Razziz, lives comfortably in a fortified compound carved by slaves long ago out of the side of the ancient mountain, and just inside the English drawn Pakistani border. Afghan or Pakistani, Pashtoon or Persian, it doesn't matter; he is the de-facto tax-man around here, and woe be it upon anyone that tries to avoid his "revenue" agents.

All business dealings, legitimate or otherwise, run through him. Nothing, and I mean nothing, happens around here without his knowledge and approval. Those that run afoul of his rules, soon find themselves sans head, and feeding the ever slinking jackals on the gritty, dusty plains. Any mafia Don would be envious of his control.

If you doubt me, suffice it to say that when a rocket was launched at Spin B recently after a very long hiatus, three disembodied Taliban heads were delivered, wrapped in fine Afghan woolen shawls, to the base with apologies for the disturbance. Razziz doesn't take lightly to being disobeyed, or made a fool of.

His guards, hard, tough men with piercing eyes and sun leathered skin, patrol the streets of the area, easily identifiable by their outfits and adornments, if not just by their physical presence. Chests criss-crossed with bandoliers of 7.62 ammo and serviceable AKs in hand, they maintain the iron grip of Razziz in this province. Even the Talibanannas don't dare cross him.

It's all about the business.

And good ol' Raz knows how to dispense largess as needed. Recently, some of the black masked fellows received a small token of appreciation from Razziz; a dozen sheep, and three peacocks.

I'm telling you, you just can't make this stuff up...

Don't Leave That Powder In Your Rifle
With hunting season in full swing in many parts of the United States, it is a good time to remind everyone about Black Powder safety.

Many years ago I was at my neighborhood gun shop. Knowing my interest in all things firearms related, the proprietor showed me a percussion rifle that was brought in to him.

I gasped when he laid it on the counter. The breechplug's tang was bent, the threaded part of the breech plug aiming straight up. The barrel, what was left of it, was banana peeled forward, with large chunks missing. I asked where the lock was as it was missing, and was told that it had been blown completely off. The trigger guard was still attached, albeit loosely, but the trigger was gone. The wood around the breech was splintered and the top edges scorched.

I immediately surmised that smokless powder was the culprit. Smokless powder develops upwards of 50000 pound per square inch, whereas black powder and its modern equivalents like Goex, Pyrodex, and 777 rarely exceed 20000 PSI.

My gunsmith friend quickly corrected me. The problem was black powder that had been left in the chamber for an extended period of time!

Closer examination of the charge area of the breech revealed extensive pitting, so much so that it actually looked like it would have been an egg shaped cavity before it let loose.

The owner of the percussion rifle said that it had been left loaded throughout the muzzleloader season, and when hunting season was over, he attempted to discharge it. The first two caps did not fire the weapon, but upon touching off the third one, the rifle blew up between his hands! He was fortunate, said the gunsmith, to only suffer some powder burns, and a shallow gash across the top of his hand.

The long and the short of it is,


Do Not Leave
Your Muzzleloader Charged!
Pull the ball at the end of the day, and dispose of the powder safely.

If you buy a used blackpowder firearm, make sure you carefully inspect the chamber area for pitting and possible enlargement. You never know how the owner may have conducted his loading affairs!

Though he spends most of his time writing and keeping the world safe for democracy, Albert was actually a student of biology. Really. But after a stint as a lab tech performing repetitious and mind-numbing processes that a trained Capuchin monkey could do better, he never returned to the field. Rather he became a bartender. As he once said, "Hell, I was feeding mice all sorts of concoctions. At the club I did the same thing; except I got paid a lot better, and the rats where bigger." He has followed the science of QDM for many years, and fancies himself an aficionado. If you have any questions, or just want to get more information, reach him via TheRaschOutdoorChronicles(at)MSN(dot)com.
Posted by Albert A Rasch at 10/17/2011 12:25:00 AM 1 comment: