Saturday Blog Rodeo 11/20/10
Well, I am ahead of the game this week! Since my last two have been cut short due to situations beyond my control, I started early this week.Once again, I've been roaming the hinterlands of the hunting and outdoorsmen's internet and as usual, I've picked out posts that I especially enjoyed this past week from all of blogs I follow, and some that I found. There have really been some better than great ones this week.

(Remember if you bump into a post you especially like, drop me a note and I'll include it in the Rodeo. You can even feel free to copy this whole post and run it on your own blog; it spreads the word, and it's always nice to give a little link love to your fellow bloggers!)

Jim Tantillo of Fair Chase blog has been very kind to highlight my post High Fence Hunting; Is the Public the Problem? on his excellent blog.Two statements caught my eye, "If private companies can do better what the state cannot, then I think we should at least have that discussion,"  and,  "While many hunters enjoy eating the food that hunting yields, food is not the sole motivator for many hunters. Managers who downplay other motivations--including aesthetic motivations for sport and trophy--perhaps are guilty of a kind of blind spot."

By the time you read this, I hope to have put together yet another post on the subject, brought to mind by Jim's thoughtful comments. Please stop by Fair Chase and keep the discussion going.

Quite some time ago, even before I blogged, I had put together a monthly pamphlet called The Rasch Outdoor Chronicles. I had no idea that blogging existed at the time, and I think I mailed copies of it to about a half dozen friends before my computer crashed and I lost all of my templates and articles. Among the many I had written was one called "2 for 1." It was an idea I had for increasing the number of hunters and pro-gun people. I was blog hopping again and I found an old friend "Ethics and Environment," a well written and thought out blog by Josh Stark. In his post Quick thought from the Each One Teach One idea, he reminded me of that idea. Let me quote: "Hunters, if you are so inclined, I recommend you seek out some of your more environmentalist acquaintances, talk up the beauty and experience of intimately knowing your habitats and gaining sustenance from them, and see what happens." I think this post is another one that has made me think of some great ideas to expand and act upon! Thanks Josh! 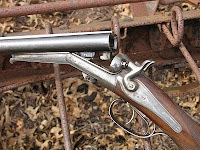 Allegheny Mountain Wanderings is one of my favorite blogs. I am always taken by the delightful pictures and good down to earth writing! It doesn't hurt that Mr Grimes is also a 16 gauge afficionado like myself, and also loves fine doubles, again like myself! You can do no better than to peruse his posts and enjoy a nice evening of reading. "Haven't had a chance to shoot her at the pattern board yet but she really dusts the claybirds when I do my part..." Check out his new Guild Gun a 16 hammer gun: Introducing Collett.

I was introduced to Silk Lines and Paper Hulls through the comment section on Chad's Mallard of Discontent. I know the good stuff when I see it. Imagine the discipline it takes to compose the following: "...I've kept a steadfast image in my head that if I remained diligent, perseverance would eventually reward me with a bird, or at the very least give me a chance to perhaps see one. I mean.... they're both quail, right? How much different could they actually be?" From Mythical Beast.


Here are a few posts that should be revisited:

Some time ago I found the following post by Orion board member Tammy Sapp, on her exceptional blog, The Outdoor Scene. In Understanding Issues: It's Complicated, Ms Sapp discusses the North American Wildlife Conservation Model, its impact, and the guidelines that have made it a success in managing wildlife for all. "The model’s two basic principles—that fish and wildlife belong to everyone and are to be managed so their populations will be sustained forever—are explained through a set of guidelines known as the “Seven Sisters for Conservation.” I strongly recommend that you take a moment and read the post, it is short, and again, elucidating!

My Favorite Marlin brings us a great, short essay: Bush Living by Sharron Chatterton. Eloquent, direct, and full of insight, it is a must read this Saturday morning.

This is a great post that fits right in with some of this week's conversation:  The Thinking Hunter comments on the level of competition that has now permeated the hunting ethos. He makes many salient points, many of which I agree with. Some of our top blogging luminaries have weighed in with their opinions, and I should hope each and every one of us will take a moment to read not only the post, Competitive Hunting--BARF! but the comments as well!


Myself, on the off hand you missed it, I posted Reasons to take a Whitetail Doe, where I discuss some very good reasons to fill that doe tag. And you might want to take a look at this old post High Fence Hunting: What are the Facts? That one was a pretty good one, with lots of comments!


Remember Sartorial:Word of the Day? Well, the renowned SBW has managed to get himself proper fashion advice from none other than the former next ex Mrs Rasch, Liz Hurley.

Through not a small bit of effort by Liz and I, SBW is now sporting the cutting edge of fashion, outdoor fashion!

Seriously, it is a must read!

Though he spends most of his time writing and keeping the world safe for democracy, Albert was actually a student of biology. Really. But after a stint as a lab tech performing repetitious and mind-numbing processes that a trained capuchin monkey could do better, he never returned to the field. Rather he became a bartender. As he once said, "Hell, I was feeding mice all sorts of concoctions. At the club I did the same thing; except I got paid a lot better, and the rats where bigger." He has followed the science of QDM for many years, and fancies himself an aficionado. If you have any questions, or just want to get more information, reach him via TheRaschOutdoorChronicles(at)MSN(dot)com.
Posted by Albert A Rasch at 11/17/2010 11:46:00 AM 2 comments:

Email ThisBlogThis!Share to TwitterShare to FacebookShare to Pinterest
Labels: Blogs of Note

My good friend Rick Kratzke of Whitetail Woods was gracious enough to allow me to post another safety related item on his blog.

Blackpoweder needs to be treated with respect and a good bit of common sense. There are a few things that may not be obvious, and I cover one in particular in the post.

Please stop by, say hello to Rick, read the post, and please add any other safety tips you can think of!.

Whitetail Woods: Black Powder How To: Guest Post from a Good Friend!

I have been meaning to mention this, and try to get pictures, but I don't have the items I need for a demonstration. With the fall hunting season in full throttle, I should have posted this much earlier!

A fall protection harness will protect you from the associated injuries from stopping abruptly against the ground. But you can also die from having the circulation cut off to your lower extremities, and serious injuries can occur from the pressure of the leg straps.

There is a simple solution that will at least keep you from perishing from the aforementioned.

Get some 550 cord. (Parachute cord.)
Don your harness.
Double up your 550 cord and thread it through the belt portion of your harness.
What you want to create, is a loop that is long enough for you to put your foot in and lift yourself off the seat of the harness.
Cut your 550, melt the ends, and tie a square knot to secure the loop. I would strongly recommend that you also half hitch the ends and pull the knots tight.
Create another loop for the other side.

Carefully fold your loops into a nice neat package, and secure them to the harness with some tape, making sure they don't interfere with your hunting.

Should you fall from a stand, and find your self dangleing by the nape of your neck, take a moment to compose yourself. You will more than likely have had the wind knocked out of you, and possible have suffered getting banged up. Check yourself carefully, so as to prevent further injury.

Next undo your loops, and carefully slip your foot in one. Do the same with the other. Now step up into your loops carefully, and adjust your leg straps. Undoubtedly they were dug into your crotch, and if you were truly unlucky, your voice may have changed substantially. Alternate taking the weight off of your legs every few minutes, contemplating how exactly you got into this perdicament. It is a worthwhile mental excercise.

DO NOT attempt to get out of your harness! You should have assistance to get down. It would be just great if the harness saves your life, and then you just either fall out of it, or get your neck all twisted up in it, and end up hanging your self.

I don't know if I will be able to get pictures until I get back home in order to explain this better. But I would greatly appreciate it if someone who has a harness would put some loops together and write a post with pictures explaining what I am trying to get across.

Please feel free to copy this post in its entirety and share it with all our friends on your blogs! If you are going to use safety equipment, let's be SAFE useing it!