I like nothing better than a good, ole fashioned, rollicking shootout on a crisp autumn morning. Blood pumping, adrenalin flowing, finger on the trigger, with acrid cordite in the air burning your nose like brimstone - nothing speaks better of a proper Sunday morning spent in contemplation of one's life.

Our irrepressible and sometimes wacky Over-the-Pond Blogger who is more commonly known as The Suburban Bushwacker, has an older post that I think is all to good to be left whithering away in the bowels of the internet netherworld.

Our entertaining, fearless Blogger/correspondent from the British Isles shares "Battue: French For Bushwacking" and explains how our Continental friends organize and run a drive. 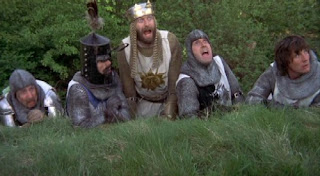 Now I don't know about you, but I sure would love to experience that at least once in my life. Of course it may also be the last thing I do, but I am willing to take the risk..

Even if they are French...

Though he spends most of his time writing and keeping the world safe for democracy, Albert was actually a student of biology. Really. But after a stint as a lab tech performing repetitious and mind-numbing processes that a trained capuchin monkey could do better, he never returned to the field. Rather he became a bartender. As he once said, "Hell, I was feeding mice all sorts of concoctions. At the club I did the same thing; except I got paid a lot better, and the rats where bigger." He has followed the science of QDM for many years, and fancies himself an aficionado. If you have any questions, or just want to get more information, reach him via TheRaschOutdoorChronicles(at)MSN(dot)com.
Posted by Albert A Rasch at 6/27/2011 12:43:00 AM 4 comments: