Building a Homemade Pirogue
Part III: Measuring for the Ribs.

Making a pirogue without plans isn't very difficult at all. Not knowing what you are doing though, makes it more interesting.

I keep on thinking of improvements I could make to the next pirogue or punt boat we build; ideas of things we should have done, or things that we thought of on the fly. We will incorporate those ideas into the series as "Lessons Learned." And when we build the next homemade pirogue, johnboat, or punt, we will include them as part of the tutorial. 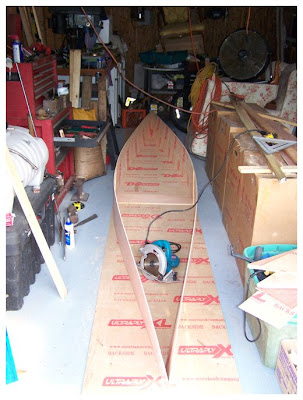 Well, as you can obviously see,
I didn't get it done in time for Christmas!


What can I say! It was Christmas before I knew it! I'll make up for it by finishing before the New Year! Deal?
Ok now that everything has dried and cured, it is time to cut the ends. Line up the joints, take your saw, and using a straightedge or speed square as a guide, cut the ends off at 45 degrees. (Adjustments to this later!) Like this: 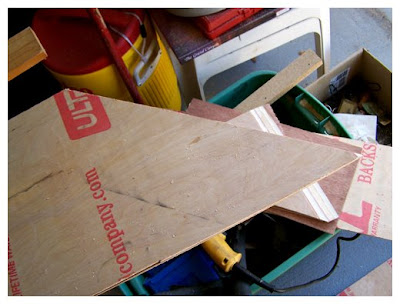 Don't forget to clip all the nails flush with the wood. Preferably before you put them together to cut them 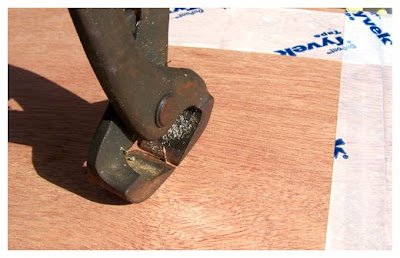 Later on we will tap them flat with a hammer backed up with another hammer You could also clinch them over, but with these small brads, that might be tough.

I knew that the pirogue would be 28 inches in the middle, and that I was going to put in 3/4 of an inch rocker into the bottom, so I taped up the ends, put a 27 1/2 inch piece of wood on the bottom to spread the sides, and a 34 inch piece on the gunwales to spread the top. 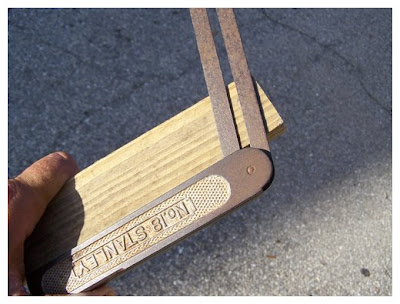 
I cut the spreaders square, measured the angle of the sides, and then recut the wood with the proper angle. Now the angle at the bow and stern can be measured. Make a note of the angle an keep it handy for later. Easy enough. Except that I have about 3 inches of rocker for and aft and I can't figure out if that's OK or not. We'll see how big of a problem this becomes, if any.

Knowing the proper angle for this particular rib section, I cut the ribs to the proper angle, screwed them in place, and temporarily clamped on a top and bottom section. This will actually hold the pirogue to shape. You can further adjust the shape by moving the rib sections fore or aft. They say that pirogues carved out from solid cypress trunks were tear drop shaped.

Good news! Grandpa is going to lend me his 10" table saw which will make my life oh-so-much-easier! First things first though. It needs a thorough cleaning. 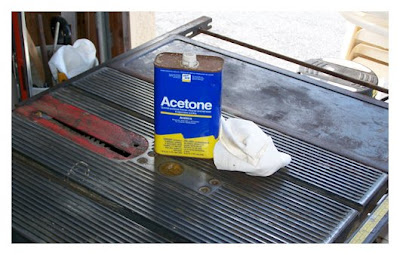 Grandpa, its a table saw! Not a work bench...
One thing that I am adamant about is that the blade be square to the table. 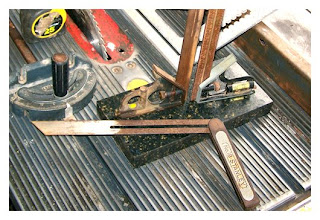 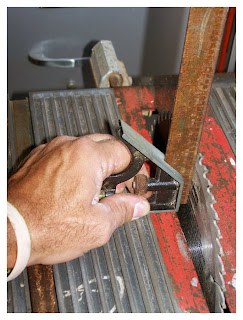 I have yet to get on a table saw where the blade was square.


Second is that the fence tightens parallel to the blade. You have to check each and every time you move the fence, unless you have one of those fancy ones from Biesemeyer. 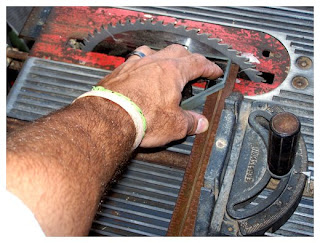 Last, I check, and adjust as needed, the miter gauge. Since I'm "borrowing" the table saw for "just" a month I might go ahead and make a cross cut sled for the saw.We have one rib in place temporarily, and now we'll measure out the rest of them. You will need a total of five or six rib sections, and can do it with as little as four. Since I'm putting in flotation/storage areas in at both ends which will act as the first and last rib sections, I figure three more rib sections should help with rigidity and not add much weight. 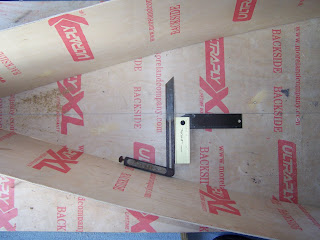 I measured across the bottom where I wanted the first rib section to be making sure I was square to the centerline. If I could find one of the six chalklines I own I would have snapped the line rather than running a piece of Dacron braid as a line. Work with what you got, I always say.I cut the 1X2 bottom piece to length. You have a compound bevel on the ends, so make sure you mark which way is up so you can keep track of it while cutting it.

Measure the vertical angle first, then the horizontal. You have to transfer that to the ribs and bottom section. I had to do it a couple of times until I got it right. Fortunately you're not dealing with expensive hardwoods, but cheap pine. By the way this could all have been ripped out of a 2X4 if that's all you have. At the rate I'm going, I may have to resort to that. 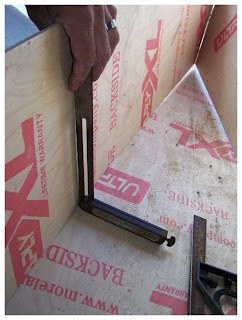 I cut the vertical angle first, on not only the bottom rib, but on both the top and bottom of the side ribs. 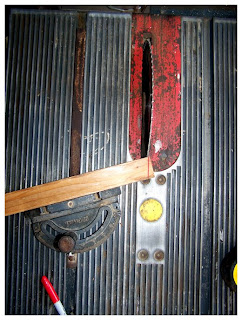 The three rib sections in the middle are pretty much square to the hull, but the two closest to the end have to be beveled in order not to twist the hull out of fair. 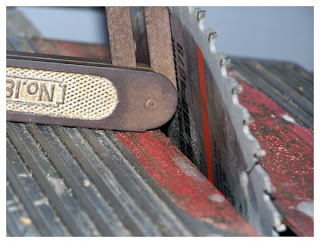 I carefully ran them through the table saw and after two or maybe three tries, I finally cut the bevel on the right side so that it all lines up properly. 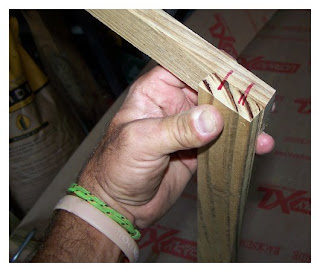 The red lines are so that I can keep them in order. The other side has two dots on each piece.

I want to apologies for taking so long to build this. I thought I could do it quicker but I have run into a couple of things here and there that have postponed the completion!

Tomorrow my goal is to have all the rib sections cut out and lapped. Hopefully I can also cut out the two stem pieces. Those are probably the most complicated part to cut out in one piece. If I can get that far Blake and I will attach them, the ribs, and flip the sucker over and mark out the bottom for cutting.

When I'm done with building the pirogue, I will be redoing the whole project. My thought is to make a better tutorial than this disconnected series of posts. Hopefully I'll have some lessons learned areas that will help anyone trying to build a pirogue have an easier time of it.

Don't know what you guys said but I can imagine it might say the same thing which I have to say.

Very good craftsmanship and hats off to the dedication in building it!

It might not hold a couple of fat asses like Pablo and I at the same time!!!