As everyone knows, the first thing we are going to do is make sure the Ruger is unloaded, before we do anything. It is important that you instill these habits in yourself and anyone else that handles firearms in your proximity. 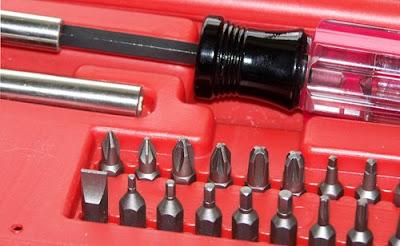 Hilti multi-bit tool kit
It's convenient to have one of these multi-bit screwdriver kits. Brownells has an excellent kit with many of the most common bits. With the proliferation of allen head and torx screws now used in firearms these kits are both convenient and compact. This kit is a well made set from Hilti.

Let's begin the field strip with the barrel band, and remove the screw that clamps the band in place. Use a properly fitted turnscrew (screwdriver for garage mechanics) and carefully loosen the screw. 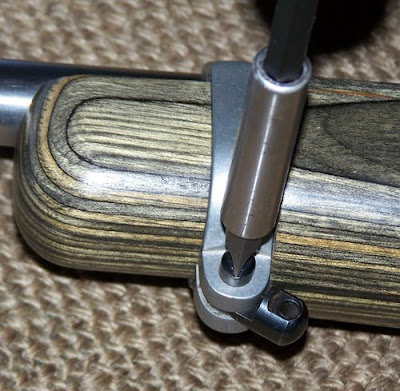 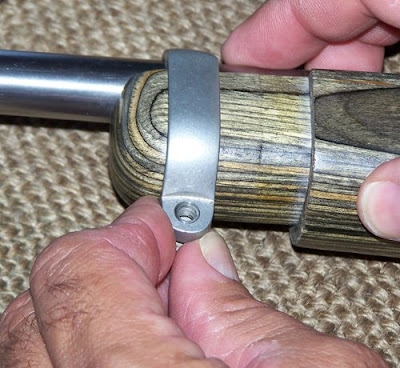 Remove the barrel band
You may have to pry the ends slightly to remove the band.


You will notice that just forward of the magazine well is the takedown screw. Again, with a proper screwdriver, loosen and remove the screw. Make sure your screwdriver fits, and don't booger up the screw! 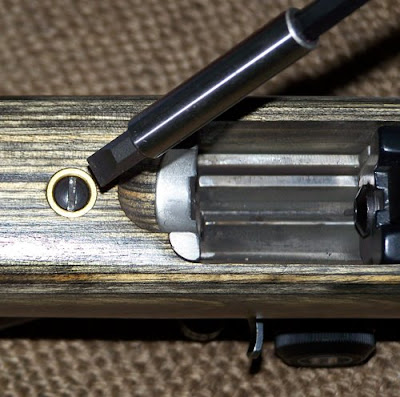 Loosen and remove takedown screw
Now place the safety in the middle between Safe and Fire. The barreled 10/22 action should slide right out of the stock. 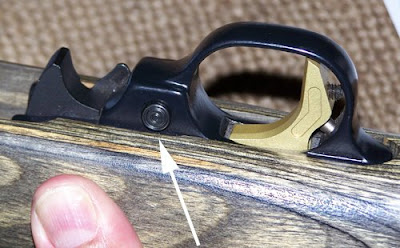 Safety halfway between fire and safe 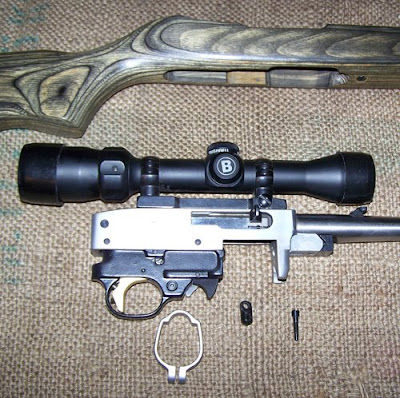 Initial disassembly of the Ruger 10/22
Now you have the the action and barrel out of the stock, so let's remove the trigger assembly.

There are two cross pins that hold the trigger group in place. 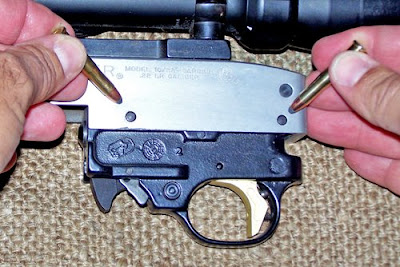 Pins that hold the trigger group in place. The Ruger 10/22 trigger group is easily replaced with an aftermarket version.
Push them out from the left side of the action to the right side. See the picture if you are not clear. Use the tip of a small caliber cartridge, or a proper brass drift or punch. The pins are a slip fit. At no time do you need a hammer or any other striking object. Once the action is in the stock, the pins are held in place. 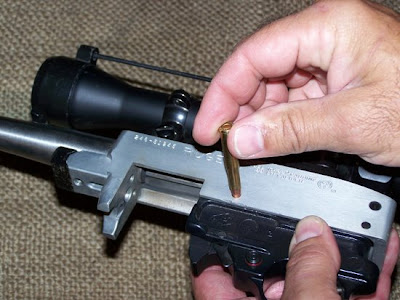 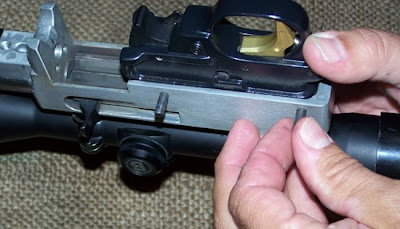 Pins come out easily
The trigger group will drop right out, or lift off depending on how your holding the Ruger. Replacing the trigger group is probably the first and quickest way of increasing the accuracy of your Ruger 10/22. 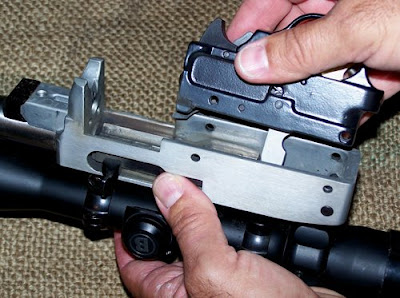 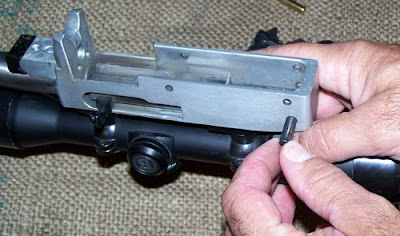 With the bolt stop pin removed, the bolt assembly can be removed. This is pretty much a two handed affair. Pull the bolt handle all the way back.

Bolt and bolt handle held to the rear 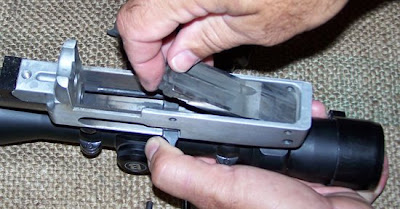 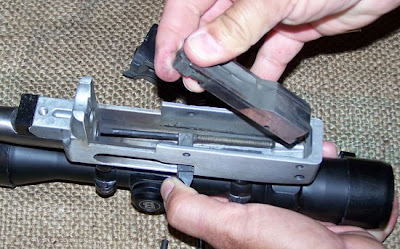 When you have the bolt out, let the handle go back slowly forward with your hand. Be careful, if you let the bolt handle fly forward it may crack at impact. 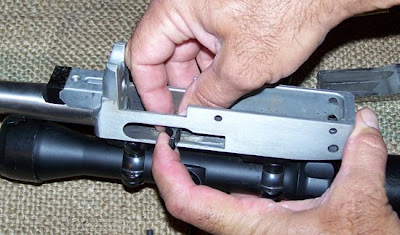 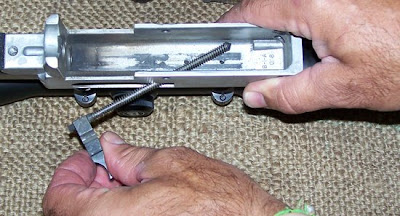 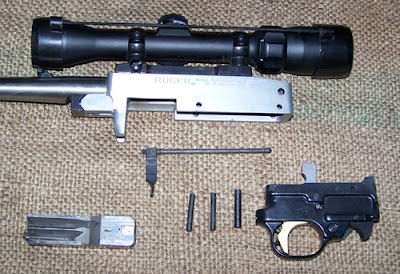 Removing the Barrel
If you are going to really give it the all over and scrub it clean, then remove the barrel.

Removing a Ruger10/22 barrel is very simple and adding an aftermarket one is just as easy.

You will need a 5/32 allen wrench. There are two machine screws that hold the barrel to the receiver. 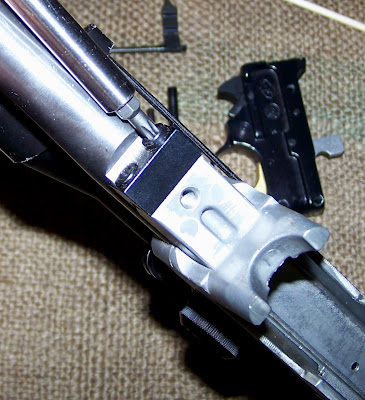 Loosen and remove the two screws that tighten the V-block onto the barrel at the front of the receiver. 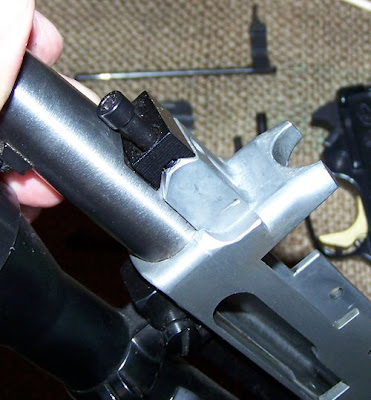 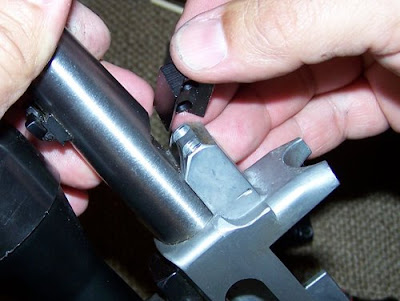 Remove the V block
Carefully remove the barrel from the receiver. It may take a little twisting and pulling. 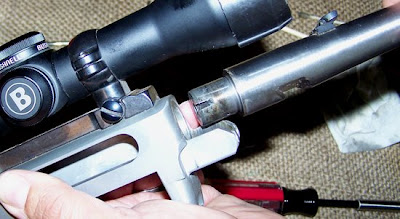 The Ruger barrel comes right out
That's it! The Ruger 10/22 is completely field stripped and ready for a thorough cleaning.

We will continue with cleaning on our next Ruger 10/22 installment, and then follow up with the assembly process.

Don't forget we also have done a Ruger 10/22 Rotary Magazine tutorial! Please check it out at:


Follow the rest of the maintenance series on the Ruger 10/22:

Nice tutorial, your pictures really make it easy to follow along and not lose track.

You know, that's a good idea. I'll start to put it together after I'm done with the 10/22 tutorials. I would like to do one on the 1911 also in the near future too.

Again, thanks for the input and thank you for highlighting The Chronicles on your blog so often!

Again great work. Anyway to get a pdf file?