Building a Homemade Pirogue
Part VII: Attaching the Bottom and Finishing Up

Making a pirogue without plans isn't very difficult at all, so there's no need for free plans. Not knowing exactly what you are doing though, makes it more interesting. I have been plugging away diligently when time allows to finish this project up. I've learned a whole lot, figured out things that I should have done differently, and decided on some things that should be done to make it easier and better for the next go around.

We were muscling the chines into place last time (Part VI), so now it is time to get the bottom on.

After leveling the chines, we tacked the bottom in place with a few well placed brads. I happen to have a router which we put to good use cutting around the hull with a laminate trimming bit. A Jig saw and a scrap of plywood would do just as well, protecting the hull from any scratches or cuts. 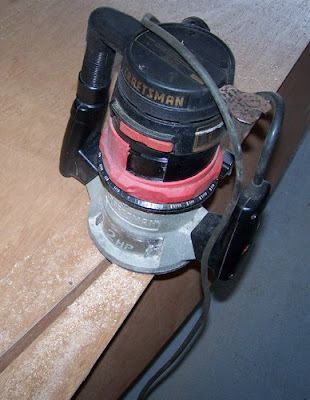 Trimming the excess off.
Now that the bottom is pretty close to shape, pre-drill and countersink your screw holes. 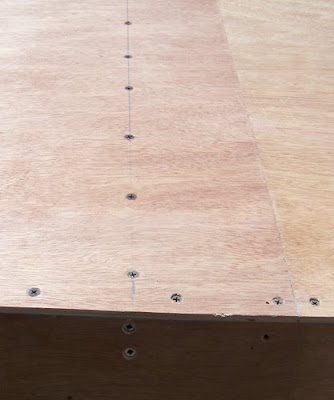 Screw it down every three inches or so.
Time for the glue-up. I have a half dozen tubes of construction epoxy that I figured would do the job. The only problem is that construction epoxy has about a ten minute set up time, which barely gives you time to mix it properly. Work with what you got.

I had to glue down about twelve inches, drive screws for six and go back and glue another foot. I tried to stay about six inches ahead of the screwed down part.

With the bottom secured, the block plane makes short work of trimming the overhang flush. Just leave the transom overhang alone for now.

Touch it up with some sandpaper on a block if you feel the need to do so.

Since the boat has a flat transom, I needed to make a cover. Find a left over piece of plywood and trace out the shape. Cut it oversize, and glue and screw or nail it in place. Make sure that it fits tight and square to the overhang that we left from the bottom. 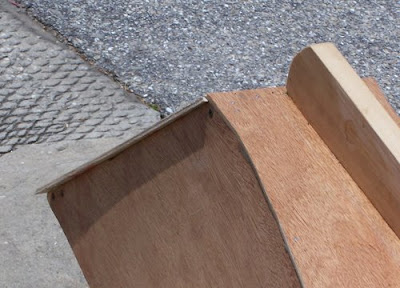 Transom piece beveled and butted up tight to the bottom.
Break out the block plane and shave the transom down to size. Don't forget to trim what was left of the bottom also.

I added a skeg for a couple of reasons. A skeg will help the pirogue track straighter, and when it is being dragged out of the water, it will protect the bottom somewhat. I made it from a piece of left over 1X4.

You can use a table saw to cut it or do as I did, and rip it with a handsaw.

Touch it up with the block plane... 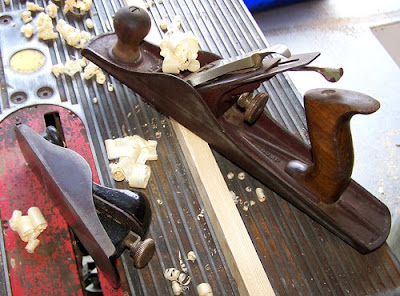 My Stanley block plane on the left and the Stanley jointer.
and finish it with a jointers plane is you really want to. The only reason I did it was so I could show the jointer off. I refurbished it from a rusty piece of junk I got at a flea market.

Draw a line from the tip of the bow to the middle of the transom. 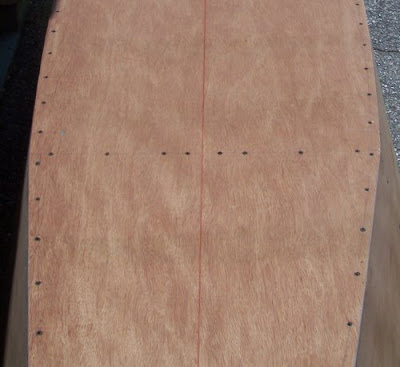 Chalkline on the centerline.
Tack the skeg on and predrill and countersink the screw holes from the inside. Remove the skeg, coated it with plenty of glue, position it properly and draw it up tight and into place with the screws. 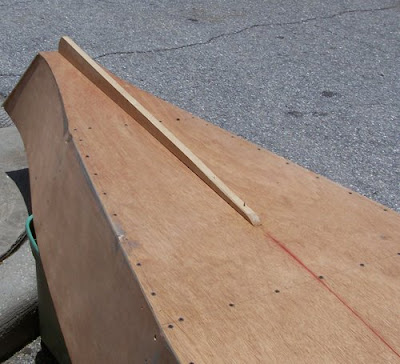 Skeg in position on centerline of boat.
Lesson Learned: I may add two more shorter and not as tall skegs adjacent to the middle one. This will keep the corners from dragging as bad when you are single handed and lifting it by yourself. Next time I'll go with two an inch from the sides of the transom.

All that is left to do now is to add on the gunwales, plug up all the holes, fill the screwholes, sand them flush and paint the pirogue. Any screws that aren't completely countersunk, have to be removed re-countersunk, and replaced. That of course, would be in a perfect world.

But, being that I am about out of patience, I plugged the holes with wood putty, and gave it a quick coat of exterior grade paint on the outside. I'll cover and sand the screw holes as time permits, and making and installing the gunwales can wait until I can scrounge up more materials! 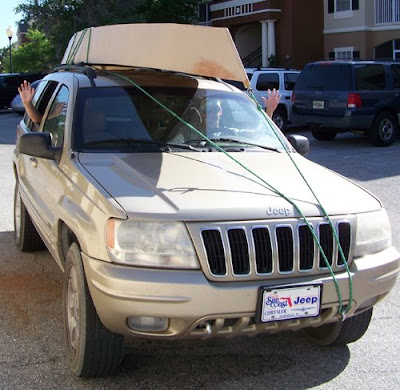 Off to Lake Uihlein !
I have lots of photos of the initial field test, that I will post for everyone tomorrow. The darn thing worked better than I expected! I'll have the full report for y'all tomorrow.


Making a homemade pirogue is well within the capabilities of anyone with a modest set of tools. I would recommend it as a great family project, or an older kid's project. The materials don't need to be top of the line, and a good bit of it can be scrounged up.

Now that is a lot of satisfying work right there.

Just a little camo to break it up for the Sacramento Valley and I'm ready for ducks!

BTW, I was reading your latest posts on Afghanistan..wtf are you doing there? What a dustbowl I'm happy to leave to history... Then, again, would love to hunt for those wild sheep and ibex in the northern border mountains! :)