Holy Smokes is it hot!

But as they say, “It's a dry heat...” Like that somehow makes it more bearable. Ok at least you don't have to chew your air before you breath, unlike some days in Florida where the air is sometimes so thick, that you can part it with a knife. But still, it's hot as the devil's own furnace. 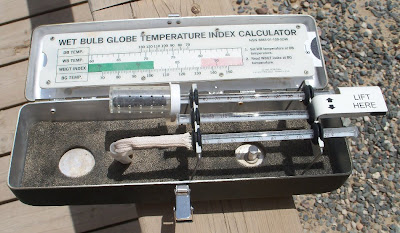 You're reading that right. 112 degrees hot!
They are being very thorough on the in-processing this time around, and they sure do make sure that the dot the i and cross the t.

The Kuwaitis have been very solicitous and helpful, but their lackeys and servant are anything but. I'm not sure where they are from, but they are rude and surly. I guess I would be to if I was beaten regularly with a switch...

The Americans soldiers are also very friendly and helpful here at the base.

The flight in wasn't all that good. First United screwed up my boarding pass, so I had to go through security twice. Then they didn't give me the aisle seat I originally had. I managed to get that fixed. Then the service on the plane itself was poor. The food was mediocre at best. And boy is the leg room limited; I'm glad that I'm not six foot tall. After a tedious twelve and a half hour flight, we finally put down in Kuwait City, much to everyone's relief.

We cleared Customs without a hitch, and were immediately assaulted by a legion of shuttle operators wanting to take us from the airport to the base – for a price... about $50.00 and maybe your head if you pick the wrong one! Fortunately I knew that there was a free shuttle; it was just a matter of finding it, and thereby saving myself the money.

Once we reached the base, it was the usual hurry-up-and-wait so common to all things military. We are in 16 man tents, air conditioned I might add, and as comfortable as you might be at home. The food is abundant, if a little bland, and there's plenty of entertainment... If you like watching water evaporating.

I should be heading into Afghanistan in the next few days. We have some more gear that needs to be issued, and a couple more shots; and then it's back to work. I'll keep you all posted!

52 degrees here in Massachusetts. Send some of that heat our way, Albert!

Albert,
Keep your head down and look for any suspicious wires leading into the porta-potty head.....we would'nt wanna loose you while ur reading Field & Stream in the Oval office! God speed......

" and there's plenty of entertainment... If you like watching water evaporating."

That's the chap i tune in to read - great riff!