The Range Reviews: Remington R-25
I recently had the opportunity to field test the Knight's Armament Company's SR-110 SASS here in Afghanistan. Unfortunately I was not permmited to take any pictures. Shoot, I couldn't have any civilian communications, recording, or even an IPod when I went into the camp I was visiting. No worries though, I had a good time!

That got me to thinking about Remington's offer, the R-25. I had recieved notice on the weapon some time ago, but being more of the wood and rust blued steel kind of guy, I had filed the email in the "From the Manufacturer" file. I burrowed through the file and pulled it out, and studied the information available on the net.

Let's check the specs out. The upper and lower receivers are made from aluminum forgings. The handguard is a turned aluminum tube. All parts are impervious to the weather, so weather changes will have no effect on accuracy. The Remington R-25 rifle has a free-floating 20 inch fluted barrel, that is button rifled in a 1:10 twist rate. Remington had the good taste to provide a recessed crown at the muzzle. Moving to the receiver, you will find a Mil-Std-1913 “Picatinny” top rail. You can mount any number of optics with standard MilSpec mounts on the rail. The gas block where the front sight mounts, has rail slots for mounting other accessories such as a laser. The R-25’s pistol grip is identical to the AR-15/M16 and AR-10 series rifles, as is the buttstock. On the bottom of the buttstock and forearm are sling swivel studs. The butt also has the standard hinged trapdoor lid designed to hold a military cleaning kit, but that is not included. 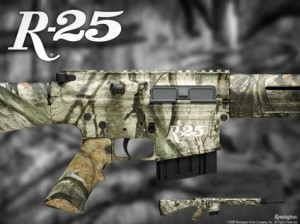 Just like your AR15 or M16/M4, a captive pin at the rear of the upper receiver pushes out, the upper can then pivot forward on the front pin. You now have access to the bolt and trigger group. With the upper receiver pivoted forward, pull back on the charging handle and the bolt slides out for maintenance and cleaning.

Now, to placate Kalifornia, the factory R-25 magazine's capacity is a measely 4 rounds for all calibers. That's still three more than my Ruger #1, but luckily the R-25 will accept standard 20-round AR-10 magazines. Overall length for the Remington R-25 is 39.75 inches, and the average weight for the rifle is 8.75 lbs.

Interestingly, Remington opted to make the R-25 available three additional calibers, all based on the 308 Winchester case. The R-25 is configured to allow users to switch between 7.62mm NATO/.308 Win., .243 Win., and 7mm-08 Rem., simply by switching upper receivers. For hunting applications, this might be an optimal solution for those that require a multi-calber solution for different hunting applications. In my opinion, the Remington Model R-25 multi-caliber rifle could stand to add a couple of more rounds to its repetoire: 358 Winchester, and the 260 Remington! Now we are talking versatility. 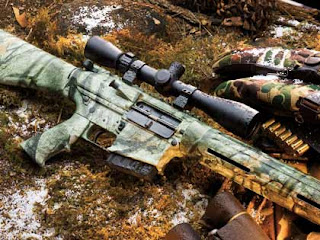 For those that are interested in the tactical applications of the rifle in addition to the hunting capabilities, you will find that the the AR-10/AR15 family does not require one to "refamiliarize" oneself with a completely different platform. Whether tactical operations or hunting applications, you can concentrate on what you are doing. Operation of the firearm, the ergonomics, and all the controls are identical. Furthermore as options are added to the rifle you can test them under real world, albeit non-threatening, conditions.

Now for the some of the less than desireable features:
-I am told that the trigger is lousy out of the box. Nothing new there, as most rifles exhibit poor, lawyer-proof triggers. Fortunately, there are plenty of aftermarket triggers you can install and make the trigger purr.
-There are many reports of the 308 version jamming with anything but commercial ammo.

There are several other semi-auto 7.62×51mm NATO/.308 Win.
tactical/sniper rifles that could conceivably be used in a hunting application. There are the AR-10 based systems like the Knight’s Armament Co. SR-M110 S.A.S.S. (Semi-Auto Sniper System), and Armalite's AR-10 SuperS.A.S.S. In addition there are the M1A variations like Springfield Armory's National Match M1A, Super Match M1A, or M25 Whitefeather Tactical/Carlos Hathcock M1A. Any of these have the capacity of being dual role rifles in your personal inventory.

Email ThisBlogThis!Share to TwitterShare to FacebookShare to Pinterest
Labels: AR15, the range reviews

I want one. No. Make it two. I've been a really good girl this year. Maybe Santa will bring me one? One can hope...

I've been tempted by these for a while. Your review further piques my interest. Visiting here can be spendy ;^)

I have to admit, I would be tempted if it was offered in 358. I already have an AR15, so my need for another automatic is less than immediate.

Having said that, I intend to add to the collection, and a 308 is a requirement for me. The R-25 may be a good choice for my needs.

358 would be an intriguing offering. Around here it's the preferred bigfoot cartridge ;) but it'd do just fine on Elk and Bears too.

Mo,
thanks for stopping by! I think the 358 is a vastly underrated cartridge. It's equal in performance to the 35 Whelen and adequate for everything in North America in the hands of a deliberate shooter.

Albert,
Why the 358? It doesn't seem to be that popular, and wouldn't you agree that for you it falls somewhere close to a small bore? LOL!

I 'own' one, as of five days ago. MY trigger was pretty good out of the box with maybe 5-6# but very smooth! The charging handle/bolt carrier IS GRITTY and really tough to pull. I've done some polishing and it IS getting better however I may send that out for some real smoothing... balance is very nice and although it is heavier than my 15 it 'just doesn't feel heavier.'
Accurate and will shoot to 1000 yards, verified and observed (I mean it will 'hit' at 1000 not just kick up dust!). Good AR.

I have one and a Leopold 4.5-20 scope and the trigger is fine. I shot a number of times at 100-200 yds with my nephews. Was a blast. The last time I shot with them the rifle had difficulties sending the next round into the chamber. Not sure if it was the ammo or a lack of lub. It had not been a problem before using the same ammo. Last week I shot 20 rds at 600 yds. I used rem ammo. After I found the paper I was able to get it in the 8-10s but want to shot more there. After that I tried Silver bear ammo.
I didn't hit the target with 3 rounds that I tried with. I didn't want to change my sights to shoot that ammo.
What ammo was being used at 1000 yds?

I have the .243 model and was able to triple tap into a silver dollar at 100 yards right out of the box. Very happy with it despite needing to send back to have the chamber polished because soft tip ammo stove pipes.

mine is in .243 its the most accurate rifle I have shot to date. The envy of ALL my shooting buddies..