How to Smoke Fish: Two Methods. 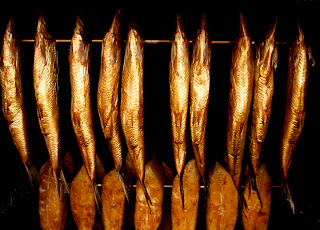 Smoked fish are fish that have been cured by smoking. As part of our Self Sufficiency series, we have researched the process for smoking fish for our faithful and errudite readers. The preservation of fish has been an integral part of every culture that subsisted on fish. Over thousands of years, man has perfected the art of drying, salting and smoking fish. The fisherman's catch, if properly preserved, can be an exciting addition to family meals over an extended period of time; when properly done smoking will preserve fish for several weeks or even months. Smoking is not only one of the oldest methods of preserving fish, but an excellent way to preserve fish that you don't plan to or cannot eat immediately. The fish dries an it hangs over a smoldering fire while the smoke infuses it with its distinct aroma and flavor. Not only does the wood smoke add flavor, it also adds color. The brining process that precedes smoking, helps to preserve the fish.
The majority of the following comes from Seafood NIC

Smoking Methods
There are two general methods of smoking fish: hot-smoking and cold-smoking. Both require brining the fish, but the amount of brining time differs as does the length of smoking.

Hot-smoking (also called barbecuing or kippering) requires a short brining time and smoking temperatures of 90°F for the first 2 hours and 150°F for an additional four to eight hours. Hot-smoked fish are moist, lightly salted, and fully cooked, but they will keep in the refrigerator for only a few days at best.

Cold-smoking requires a longer brining time, lower temperature of between 80-90°F and extended smoking time of one to five days or more of steady smoking). Cold-smoked fish contain more salt and less moisture than hot-smoked fish. Once the fish has been sufficiently cured by smoke, it will keep in the refrigerator for several months. 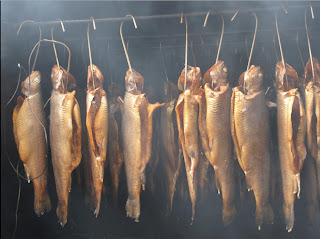 Parasites In Fish
Freshwater and marine fish naturally contain many parasites. These parasites are killed during the hot-smoking process, as long as the temperature reaches 140°F and stays there for a short period of time. For cold smoking, you must use commercially frozen fish or freeze your fish to -10°F for at least 7 days to kill any parasites that may be present. Check your home's deep freeze and see if it will get to -10°F, in many cases it will be about 10°F higher at 0; not good enough.

Smoking Tips
Any fish can be smoked, whether fresh or saltwater. Species such as Salmon and trout, which are high in fatty oils such are highly recommended. Fish that are high in oil will absorb the fragerant smoke and have a smoother, creamer texture than leaner fish do. Lean fish if not smoked with care, become dry and tough.  Mullet is a common hot smoked staple here in Florida is an oily fish and I can tell you it readily absorbs the smoky flavor!

Most any kind of wood will work, but you might wish to use woods like aspen, alder or fruit woods.Regardless, use seasoned non-resinous woods: hickory, oak, apple, maple, birch, beech, or alder. Avoid: pine, fir, spruce, etc. or green woods. Salmon is usually smoked with alder, this is a tradition that dates back to the indigenous peoples of the northwestern United States. Of course you can use mesquite, oak or whatever your favorite smoke maker is. Because of the short smoke times, mesquite will not have a chance to impart too bitter of a taste, but I recommend using it sparingly. If heavier smoke flavor is desired, add moist sawdust to the heat source throughout the smoking process.

Remember to control the heat by adjusting air flow to the fire box.

Preparing Fish For Smoking
Much like what we discussed in the drying fruit segment, use only fresh fish that have been kept in a clean and cold condition. Remember that fish that have been handled carelessly or stored in poor conditions will not produce a healthy and well finished product. Do not use fish that are bruised, beat-up, or that are damaged.  We are looking for firm well prepared fish to make a superior product!

If you catch your own fish, make sure you clean and pack them in ice before starting home. Store the fish in the refrigerator when you arrive until you are ready to prepare them for smoking.


1.Remove scales by scraping against the grain with the dull edge of a knife.

3.Wash body cavity with running cold water to remove all traces of blood and kidney tissue (dark red mass along the backbone).

4.Split the fish by cutting through the rib bones along the length of one side of the backbone.

5.For large fish, remove the backbone by cutting along the other side of the backbone to produce two fillets or boneless sides. For small fish, the backbone can be left attached to one of the sides.

6.Cut the sides of large fish into uniform pieces about 1½ inches thick and 2 inches wide. Small fish halves can be brined and smoked in one piece.

Preparing Brine
Prepare a brine of 3½ cups table salt in 1 gallon of cold water in a plastic, stainless steel, or crockery container. Red or white wine can be substituted for a portion or all of the water, if desired. Stir the salt until a saturated solution is formed.
Spices such as black pepper, bay leaves, seafood seasoning, or garlic, as well as brown sugar, may be added to the brine depending on your preference.

Use 1 gallon of brine for every 4 pounds of fish. Brine fish in the refrigerator, if possible.

Keep the fish covered with brine throughout the brining period. A heavy bowl can be floated on the brine to keep the fish submersed, but do not pack the fish so tightly that the brine cannot circulate around each piece.

3.After brining, rinse the fish briefly in cold running water.

4.Place the fish skin-side down on greased racks in a cool shady, breezy place to dry. The fish should dry for 2 to 3 hours or until a shiny skin or pellicle has formed on the surface. A fan will speed pellicle formation.

5.Place the fish in a homemade or commercial smoker. The temperature of the smoker should be kept at about 80°F, and should never exceed 90°F. If a thermometer is not available, the temperature may be tested by hand. If the air in the smoke-house feels distinctly warm, the temperature is too high.

6.Smoke the fish until its surface is an even brown. Small fish that are to be kept 2 weeks or less may be ready in 24 hours. Salmon and other large fish will require 3 to 4 days and nights of steady smoking. To store longer than 2 weeks, smoke all fish a minimum of five days; for larger fish, at least a week or longer.

3.After brining, rinse the fish briefly in cold running water.

4.Place the fish skin-side down on greased racks in a cool, shady, breezy place to dry. The fish should dry for 2 to 3 hours or until a shiny skin or pellicle forms on the surface. The pellicle seals the surface and prevents loss of natural juices during smoking. A fan will speed pellicle formation.

5.Place the fish in a homemade or commercial smoker. For the first 2 hours, the temperature should not exceed 90°F. This completes the pellicle formation and develops brown coloring.

7.You can keep hot-smoked fish in the refrigerator. And if you freeze hot-smoked fish, you can store it indefinately
Best Regards,
Albert “Afghanus” Rasch
The Rasch Outdoor Chronicles
Albert Rasch In Afghanistan

Though he spends most of his time writing and keeping the world safe for democracy, Albert was actually a student of biology. Really. But after a stint as a lab tech performing repetitious and mind-numbing processes that a trained capuchin monkey could do better, he never returned to the field. Rather he became a bartender. As he once said, "Hell, I was feeding mice all sorts of concoctions. At the club I did the same thing; except I got paid a lot better, and the rats where bigger." He has followed the science of QDM for many years, and fancies himself an aficionado. If you have any questions, or just want to get more information, reach him via TheRaschOutdoorChronicles(at)MSN(dot)com.
Posted by Albert A Rasch at 1/25/2011 12:10:00 AM

Email ThisBlogThis!Share to TwitterShare to FacebookShare to Pinterest
Labels: fishing, Self Sufficiency

Thanks again for an interesting text and a few delicious tips! Smoking food is very popular here in Finland as well. Traditionally hot-smoking fish is done with alder chips and on the bottom of the smoking box we put a fresh Juniper branch and a few pieces of sugar. Meat smoking however, is done in a smoke sauna.

I found your article on smoking fish interesting but want add that pickling or kosher salt should be used rather than table salt - I think it has something to do with the iodine in it.
I regularly smoke meat, fish, salt and cheese- it is an enjoyable hobby that has the bonus of putting food by.