Building a Homemade Pirogue
Part V: Attaching the Ribs
When I last left you, we were just starting to install the ribs. 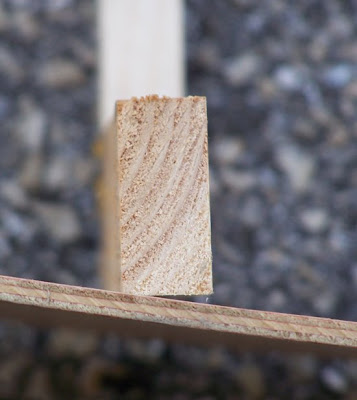 Fore and aft, the ribs need to be trimmed.

Except for the middle rib, all the others need to be trimmed a few degrees in order to keep from bending the hull in the wrong direction and twisting the hull out of fair. 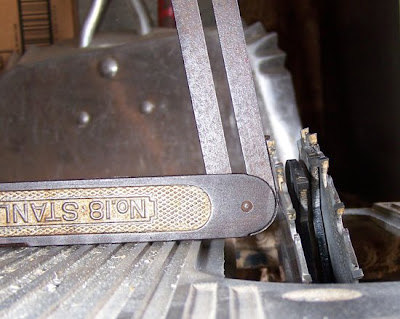 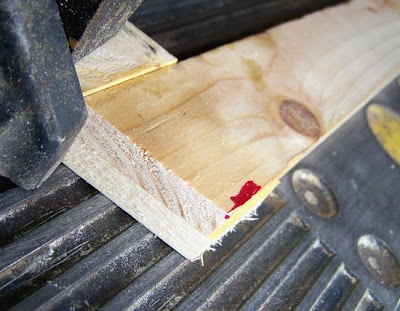 Trimmed to fit.
Take a quick measurement, transfer it to the saw, and trim the edge of the ribs. If you don't have access to a table saw you could do it with a sharp bench plane. This is when using cedar is really nice, it's soft and planes easy. I used a block plane for a couple of touch ups on the bottoms. 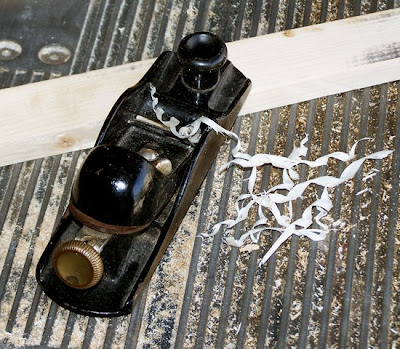 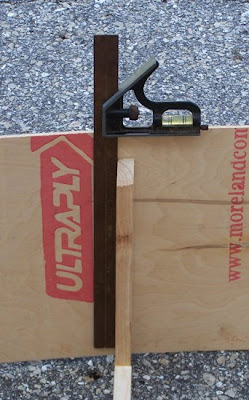 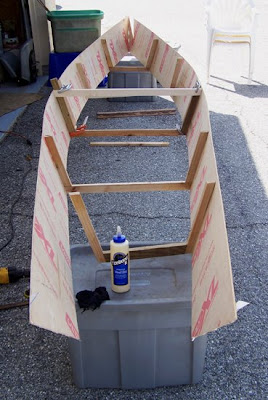 Several ribs in place.
I used a clamp to hold the ribs in place and drilled the holes for the screws with a countersink. Then I glued it, clamped it, and screwed it back together. The I repeated it on the other side.

Fortunately, with wood construction, most errors can be fixed with ease. Twice I misaligned a rib and had to reposition it. Since this will be filled and painted, holes are of little consequence. But if we were going to bright finish it, this would have been a bad bit of business.To repair these extra holes, fill it with wood putty. If you don't have wood putty, take clean sawdust, mix it with epoxy, and use that. Over fill the holes and after drying, sand it flush. 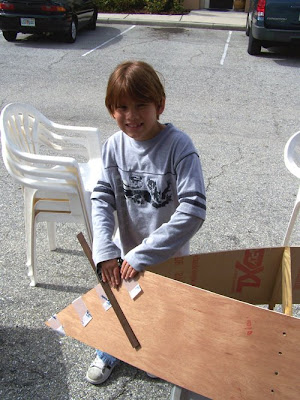 Jeffry finding the square to the bow... 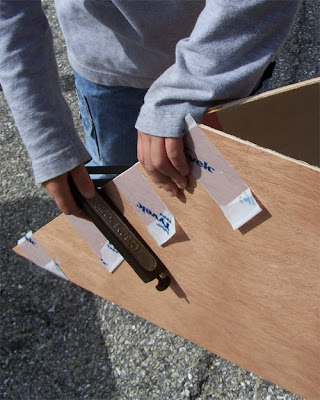 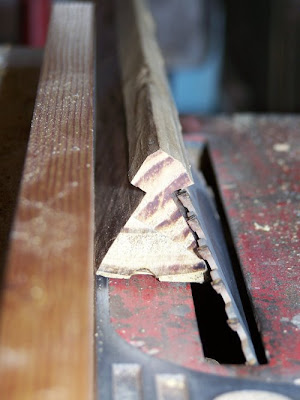 With the measurements in hand, we took it back to the table saw. There we cut out a triangular length of wood, and cut a dado on either side. 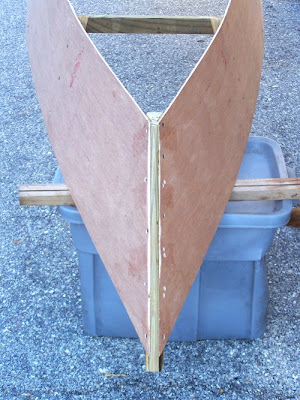 The bow put together.
Then it was just a matter of adding glue, and screwing it in place. The excess at the bottom was trimmed off with a Japanese pull saw.

Now it was time to turn my attention to the stern. 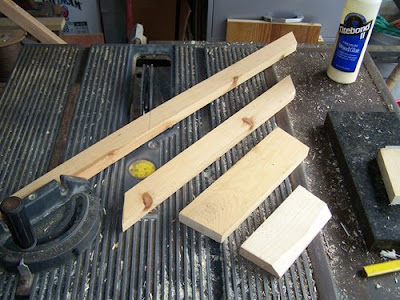 The stern took a little tweaking. I wanted a flat transom. So I cut out the pieces and glued and screwed them together. 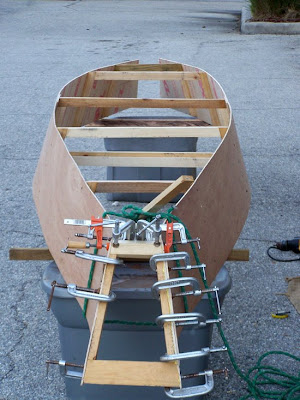 Plenty of glue, lots of screws, and as many clamps as I could spare!

But after building the frame for the transom I realized that I had built it square, with no way to angle it to meet the lines of the hull. 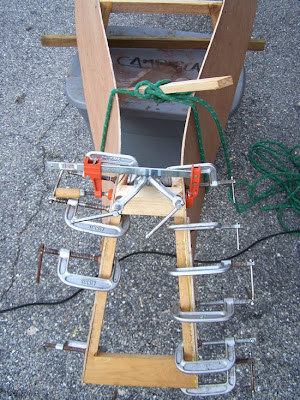 The green rope and stick make the Spanish windlass.

So after giving it due consideration, I just glued and screwed it in place. The judicious use of a Spanish windlass made it all possible. 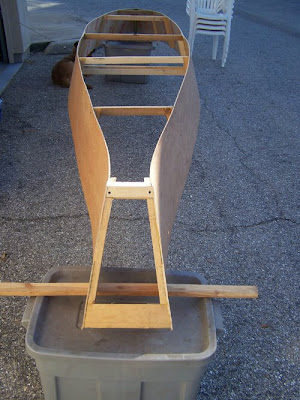 Even though it's not what I had in mind, I still think it looks pretty good.

Well my friends, we are down to the home stretch. Next we cut out the bottom, cut out and attach the transom, gunwales, and the chines which are the hull to bottom reinforcement.

What an interesting read! Very nice pictures of your process, too. Julia

Cool project you need to post pics it finished.

I will continue posting on the process. On the left hand column there's a link box with the previous installments.

I plan on making another one, incorporating any lessons learned, and taking more pictures. Then I'll do an all inclusive post, that will be a little easier to follow.

Albert I bought a kit from this place that comes with the bow, stearn, ribs and directions for a double ended classic pirogue. It will probably not float someone as large as me but I hope to build it some day. Ed
http://www.unclejohns.com/boat/