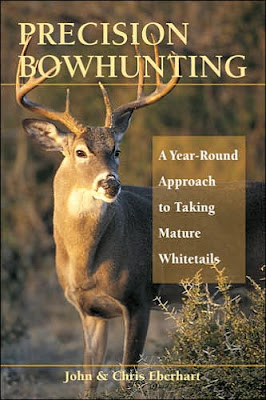 Recently I was fortunate enough to win a signed edition of Precision Bowhunting by John and Chris Eberhart, a father and son team from Michigan. So I've decided that this year I would focus a little (actually a lot) more on whitetail deer hunting than my usual hog hunting. It will also allow me the opportunity to delve more intimately with the "suburban hunting" phenomenon that is the norm in so many built up areas.

Packed with practical advice, John and Chris' Precision Bowhunting covers a year round approach to scouting, finding, and hunting the whitetail. They explain what you should be doing right now, what to prepare for, and what to expect month to month, season by season.

There are no gimmicks or tricks, just a studious application of hard work and perseverance. Hunting pressured or public land is what most of us must contend with, and that is what is covered in Precision Bowhunting.

Precision Bowhunting covers not only where you need to be, but also where you shouldn't. The Eberharts warn you of common mistakes made by both experienced and amateur bowhunters. Scent control, scouting tactics, and stand selection receive serious consideration and suggestions. Both John and Chris seem very sincere in their writing and discussions. That alone, sets the apart from many other writers in the field.

If you are new to bowhunting whitetails, or an old hat trying to up his game, you couldn't pick a better book. I learned more about scouting whitetails from this book than I have in reading everything else over the last forty years.

Be warned. It is not a "how to" book, that you can read right before season opener. It is, as the cover says, "A Year-Round Approach to Taking Mature Whitetails."

Sounds great, to me there's something so cool about suburban hunting, the need for subtlety and stealth first avoiding being seen by the humans and then the deer. The sad thing is it will never be allowed here in old blighty. The laws against bow hunting stem from the Norman invasion of 1066 - before that saxon law had it that game was everyones, William was our first hunter king and he wanted to keep it al for himself.
Castration, hanging, and export to Australia were all used as punishments at various times.

Now things are a little different - you have to ask nicely to go and live in Aus!

Seriously as i understand it today there are permitted weapons for deer hunting (basically .243 and up - but not too up) and everything else is by default outlawed. Shotguns ONLY in extreme circumstances of saving an animal from suffering (you found a road traffic accident deer while you were pigeon shooting i.e no time to call a stalker with a rifle or the local cops). Bows never. Even the country sports magazines always report poaching with bows and being scandalous for poaching and scandalous for the use of a bow which they like to make out isn't up to the job.

As all across continental europe bow hunting is permitted we do have a bow hunting association though.

I have never hunted hogs before and maybe some day I will try it but I can say I have been hunting whitetail deer now for 19 seasons and I still can't get enough of it. I hope you will enjoy.

I haven't read it yet!
But it really sounds interesting!
Thanks for sharing!