Building a Homemade Pirogue
Part VI: Attaching the Internal Chines
Making a pirogue without plans isn't very difficult at all. Not knowing what you are doing though, makes it so much more interesting.

I keep on thinking of improvements I could make to the next pirogue or punt boat we build; ideas of things we should have done, or things that we thought of on the fly. We will incorporate those ideas into the series as "Lessons Learned." And when we build the next homemade pirogue, johnboat, or punt, we will include them as part of the tutorial.

Attaching the chines turned out to be the most difficult part to figure out. The chines are the strips of wood that intersect the where the hull and the floor meet. It gives you something solid to glue, nail, and screw the floor to. In hindsight, Blake and I figured out a much better way to do it. The suggestion is near the end as a "Lesson Learned."

The 1X2 pieces of pine that I had bought just didn't seem flexible enough to take a curve. When Blake and I tried to glue them in we found that the plywood was certainly more flexible than the 1X2. 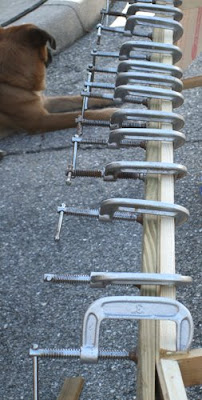 UHG! Too straight!
It was so bad that the plywood actually folded at one of the ribs. You can see it right at the bottom of the photo.

At that point we tried to put a couple of spreaders between the chines. That helped a little but didn't resolve the problem. The hull was still not very fair.

Finally in a lucky moment, we hit upon the idea of trying to force the folded plywood back in line. We bridged the rib on the outside of the hull with a short piece of 1X2 and added a clamp to either end. 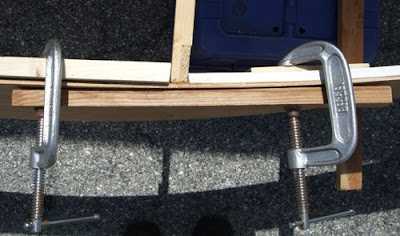 You can never have too many clamps!
We found that depending on the point of clamping, and how much you tightened it down, you could vary the amount of curve you put in the chines!

After that it was pretty easy. We glued up one side, lightly clamped it, and glued up the other side. Then we adjusted and tightened the clamps. 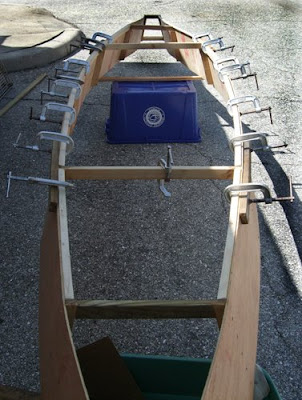 The hull is looking pretty fair now!
By now I was out of clamps so the ends will have to be done after this glue up dries.

Another thing to keep in mind is that the floor meets the hull at an angle. Leave enough wood over the bottom edge so that you can plane it flat when the time comes to attach the floor.

The chine has to stick up a little to be trimmed later.

Lessons Learned: On the next boat we build, we are going to attach the chines first. We'll glue them and screw them in right off the bat. The ribs can then be notched out to accommodate the chines. This will result in a far more sturdy set of chines and ribs. Not only that, but the plywood would not have any spots where the leverage and torquing might might fold it as was the case in this version.

Ok, so far so good, we don't have much more to go. Blake and I will add the rest of the chine strips in next, level the tops even with the hull using a hand plane, and try to cut out the bottom.

That looks like a project and a half but imagine the accomplishment you'll feel afterwards.

I've taken way to long to build it. If you know what you are doing, or at least have a guide, this could be a weekend project. Two weekends if you really want to do a smashing job on it.

When I redo the whole project as a tutorial, it will have a better step by step procedure, so that there's no wasted motions of back steps.

You really do have a lot of clamps! And my ex used to tell me I had too many tools!
SBW

The truth is I could use at least a dozen more in that size alone. This isn't the first time I've needed a but load of clamps, I once tried to laminate some strips of wood. That need clamps!

I have an idea for making some wood clamps that you can knock together out of some pallet material and I may give it a shot when this project is over.