"Dad," he said as I looked over, "if i could only fish over there," his hand waved vaguely over the water, the certainty in his voice convincing even me, "if I could just get there...

I know the big one is there!"
Blake to his Dad

Since moving to the suburbs, Blake has been fishing non-stop. Fishing from the shorelines, docks, or lakesides, he has been able to land any number of fish. Bass, bream, catfish, and assorted salt water specimens have fallen to his fishing rod. What he is lacking though, is a means for accessing the many holes, reed beds, and small islands that dot the larger lakes and intercoastal waterways.

Lakewood Ranch Lake
I've been planning on making some type of craft, preferably something relatively inexpensive, and easy to build. The pirogue is a probably the simplest of the stitch and glue boats to build. The pirogue can negotiate shallow, narrow waterways, has a relatively light weight compared to its load-carrying capacity, and maneuverability that makes it perfect for many outdoor activities. It can be easily paddled and with practice one can stand on it and pole over water so skinny that the Cajuns would say, "A pirogue can float on a heavy dew." The pirogue is at its best in shallow water, perfect for ponds, lakes, and especially tidal flats. Pay close attention waterfowlers!


With five days to Christmas, I thought I had better get on it. All Blake knows is that we are working on project "X". Fortunately I had already bought most of the materials a couple of weeks ago. I may still have to get a few odds and ends but I'll get to that when the time comes. Oh and if you are wondering if there are free plans for building a pirogue, there aren't. You don't need them it's all by eye, and that is close enough! 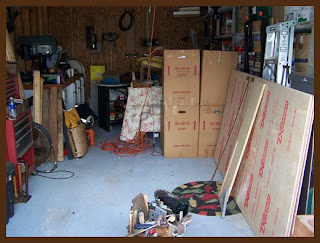 The "Shop"
Work with what you got! 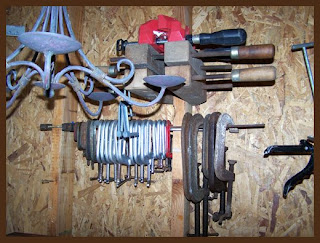 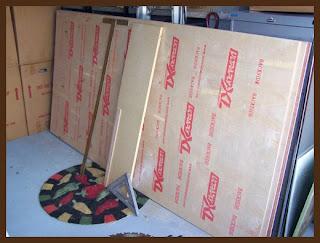 Some of the Materials.

First thing I got was three sheets of quarter inch underlayment. This stuff is really good quality luan veneer. And it isn't that expensive relative to the birch or oak plywood. I got it for $12.00 a sheet. I haven't found any voids in it, and the patches on the printed side are minimal to non-existent! The face side is clean and clear on all the sheets. Since this will be completely painted inside and out, and glued with waterproof glue, I see no good reason to go with expensive marine grade plywood. BTW, marine grade plywood is glued up with the same glue that exterior plywood is: Resorcinol. The difference between CDX and marine grade is the total lack of voids in the interior veneer of marine grade, and the C and D grade veneer on the CDX sheets.

In addition I bought some 1X2 cedar boards for the ribs and gunnels. I won't need them until tomorrow or the day after.

For the bow and the stern I have a few pieces of white oak dunage salvaged from the red steel delivered to the construction job sights. Though I've used the majority of them while bar-b-queing, I did save a couple for odd projects I have had in mind, like this one.

I've got a good circular saw, plenty of clamps, a chisel or two, hammer, nails (mostly rusty, may have to buy some more), drywall screws, pencils, a couple of bottles of Tite-Bond, a variety of squares, and another handful of tools that I'll explain as I continue. Plus I can damn near make any kind of jig I need to. 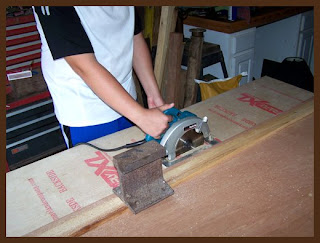 Blake cutting a strip to size. He's using one
sheet of plywood as a guide to cut the other.
The first job was cutting the sheets down to the required measurements. Most of the internet pirogue builders cut two, 10 inch wide, strips from two sheet of plywood, which leaves them with four 10 inch strips and two twenty eight inch strips. I wanted 12 inch sides so I needed to get the extra sheet of plywood. Not to worry, I'll put the leftovers to good use. In order to have one perfectly strait edge on all the strips, I cut one strip from each side of one sheet, and one from each of the other sheets. Those factory straight edges will be the bottom of the sides, assuring me a flat edge to connect to the bottom, more on that later. For a really straight cut, measure out your 12 inches, add the width of the shoe of the circular saw, and use that perfectly straight factory edge to guide your saw. Clamp the two boards together to make your life easy. 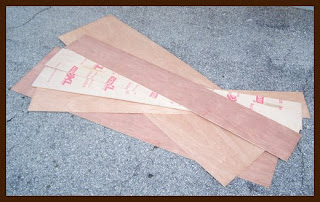 The underlayment cut to size. Four strips 12 inches wide
and two 28 inches wide.
From the two pieces that are 36 inches wide I cut two 28 inch wide strips. These will be joined together to make the bottom.

Ok I'll leave the project here until tomorrow, when we will scarf the plywood, cut the ends to the proper angle, and maybe stitch the ends together. That's if I can make a jig to cut the bow and stern pieces properly!

Please feel free to ask questions so I can amplify on this. I would like this to become a tutorial so that any of y'all who want to try can build one too.

Hey Albert,
I cannot wait to start doing more things with my Boy and Girl when they get a little older.

They do come out to the ranches quite often with me and have been since they were wee wee little tykes!
My Daughter calls all of the animals there hers: My Deer, My Buffalo and My Pigs!
It is so much fun to show them tracks on the ground and I now turn it into a guessing game for them by asking: What made this track or that one over there!

I like how you have included Blake into your outdoor activities, and the boat, can't wait to see the finished product.

Merry Christmas to all!

Working hard on it! Won't be finished in time, but we will be able to finish it together now that the hardest parts are done.

Truth is I should of done it a long time ago!

Sweeet! I've got to build one for duck season next year!