PeTA Gets Its Just Dessert, One Child at a Time

© 2010 Albert A Rasch and
The Rasch Outdoor Chronicles
$g&m f9bd 45kd q!?5. trochronicles.blogspot.com
"Or do you think the means justify the ends? You do? Well then, you better make sure that someone doesn’t shove those means so far up you ass, that you’ll need an ear, nose and throat specialist to put you back together!"

From a Chronicles' Classic:
The PeTA Files: Cowards One and All...
You know me.

Every once in while I have to rattle the PeTA cage a little and see what kind of vermin scamper out.

As you all may well remember, (See: PeTA: Why I Despise Them) last year Babygirl wanted to be Vegan, wear vegan clothes, save the whales, stop people from clubbing baby Harp seals, and assorted and sundry other things. Though I am not against one or two of those things, I wanted her to come to her own decisions based on a sound scientific thought processes, not because of evil, twisted propaganda based on half truths and lies.

Well, thanks to a diet rich in high quality American animal protein, served in the form of thick, juicy grilled steaks, big broiler chickens roasted with garlic and potatoes, along with fresh ocean caught fish cooked with butter and lemon, ,(And the occasional ice cream thrown in!) she has gotten straight A's this school year, has grown over four inches in a little over six months, goes fishing with Blake all the time, and after reading Holly Heyser's work on NorCal Cazadora, she is even contemplating trying her hand at a little hunting. I'm not sure that hunting will ever be her cup of tea, but it is a paradigm shift in her thinking. And I am willing to bet that she will be more than willing to join her brothers on a wilderness hunting adventure as long as there is a trout filled lake somewhere nearby! Oh and BTW, she's a great cook, and a crack shot, so I don't even have to worry about ever going hungry or having a bear or mountain lion eat her. Poor creature would probably get indigestion anyway...

Anyway, as usual that got me thinking about stuff. As anyone who has or is raising a young woman can attest to, they are about as irrational and strong willed as any creature comes. If I had to chose between dealing with my daughter and sorting out a gut shot Cape buffalo in the long grass, I would seriously consider sorting out the buff. But, if I can educate a teenage girl, turn her away from an emotion, guilt based line of faulty reasoning that was foisted upon her by the despicable agents of PeTA, and get her to objectively examine data in order to come to her own conclusions by a sound well reasoned process, then by golly, we should be able to do that with most rational folks.

What I am saying is, that education, based on sound science and proven track records, will win over everyone who is of a thoughtful and considering nature. And those people are the ones who we need to get on our side, because those are the folks that vote!

If you look at PeTA and its spurious claims of animal welfare on the surface, you find so much emotion driven misinformation, that you can't help but consider what they are saying as compelling. But scratch the silken surface, and what you find is a virulent cesspool of modern day Animal Rights Nazism! As usual, while they espouse freedom for all, they really mean freedom for themselves and their twisted agenda. Whereas I fight, and my friends bleed for the right of others to say and act as they please, the Animal Rights Fascists fight to legislate and use the force of the government to coerce us into following their unreasonable and unrealistic vision of utopia.

I have yet to have a single animal rights activist actually explain to me how or why their agenda isn't coercive. They want to stop hunting. In order to stop hunting they want laws passed to stop hunting. When I ask them why they feel that it is ok to pass such a law, they are left with their mouths agape or at the very least reaching for something that they themselves cannot grasp. I remind them that they do not have to hunt, and that I do not attempt to pass any laws to compel them to hunt. But yet they feel that they have every right to compel me. Where do they find the right, the argument, within their moral frame work to stop me from hunting?

If they were to pass such a law, wouldn't the end result be that the power and coercive force of the government would have to be brought down to bear upon me to make sure I do not hunt? How does that mesh with the Declaration of Independence? or the Constitution, or the Bill of Rights? They never have an answer, they do not even attempt to answer directly. At least not on their own blogs, websites, or forums.

I know my enemies, and I know the honest and compassionate also. I doubt that the honest would agree that force and coercion would be justified in fulfilling the Animal Rights agenda. But there are others that believe that they can, through law, bear the armed might of the government against those that do not believe as they do. Members of animal rights groups forget that in this country we are free men, free to do as we please as long as it does not interfere with the rights of other free men. They have the right to say what they want, eat what they want, and pretty much do what they want. Coercing me at the muzzle of a gun is not in keeping with the Declaration of Independence, the Constitution, or the Bill of Rights. 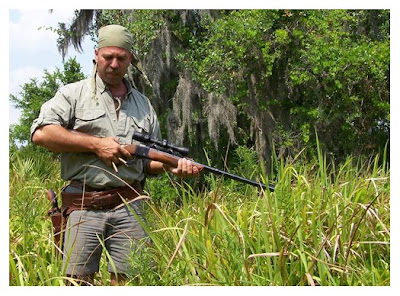 Searching for the truth...
So if you were to ask me, they are in general, a bunch of unsophisticated, hypocritical, selfish, thoughtless dumbasses, that couldn't reason their way out of a lecture hall in Berkley. Having said that, there are a couple of well intentioned and thoughtful people that I really can't say anything bad about. They have very strong beliefs that they hold to, and they also walk the walk in their own lives. I don't have a problem with them; I think they are misguided, but they are honest. And I might add that curiously enough, the people I am thinking about aren't members of PeTA either! Imagine that!

PeTA, the organization, is in my opinion nothing more than a propaganda and financial front for the Animal Rights Extremists/Terrorists that infest our nation. It is a fact that PeTA supports the ALF and ELF. Of course, there are lots of grandmas, wives, daughters, and ex-girlfriends that are well intentioned members. There are probably a bunch of sensitive guys in it too... (OMG! Seriously, eat some beef or get some testosterone shots or something!) (I couldn't help myself there, honest!)

When PeTA purposely ( or not...I doesn't matter to me one bit) goes out of its way to hurt children, understand that I am going to respond. It won’t be pretty. When I go after someone or something, my gloves come off. Wouldn’t you do the same for your children? (Hold on, didn't that loon Ingrid Newkirk have herself spayed? Do you know she was a cop too at one time?) Or do you think the means justify the ends? If you do, you have to make sure that someone doesn’t shove the means so far up your rear, that you’ll need an ear, nose and throat specialist to put you back together again!

Because I have no fear.

They on the other hand, because of their physical, moral, or intelectual weaknesses, are fearful of what they perceive to be those that are far stronger than they, and of what they cannot or refuse to comprehend. They want something else, something more powerful, to coerce the strong into meekness. Only then, when they hold the reins of power, can they feel righteous and strong.


But there's a fly in that ointment.

More related posts:
The Suburban Bushwacker: PETA - The Press Release Factory
The Rasch Outdoor Chronicles: The PeTA Files: Cowards One and All...
PeTA: Cruel to Children

Where do Donations to the HSUS Go?
HSUS University
Giving Conservation a Bad Name
Game Reserves, High Fence Hunting What are the Facts?
Sometimes it is Hard to See the Forest...
High Fence Hunting

"Only then, when they hold the reins of power can they feel righteous and strong." - Standing on my soap box and clapping over that comment! Nice write.

First off, I hope you're well and staying safe.

Second, I'm glad to hear that your daughter is finally coming around, and I'm thankful that Holly's word are helping when it comes to that - it gives me hope for my daughter's future.

And, third, you are spot on with every word you have spoken here. I have had very similar conversations with anti's and PETA supports, and they can never answer any damn question I ask them.

Albert,
Little to be said about your words except

Wow, I am SO GLAD to hear about your daughter. I know so many college students who went vegetarian or vegan after being sucked in by PETA propaganda. Many of them tell me they eventually grew out of that phase, but it's nice to know a little information can hasten that change.

Great post as always Albert, I would love to see it grace the boards at peta-sucks.com