Serial Killer on the Loose in South Carolina

© 2009 Albert A Rasch and
The Rasch Outdoor Chronicles
.
"If he comes to me, face to face, I'm ready, I'm loaded, and I'm aimed for him," said Sarah Banister, neighbor of one of the killer's victims.
CNN 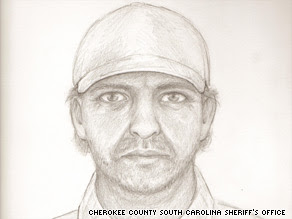 Artists Rendering of Suspect
There is a murderous psychopath on the loose in and near Gaffney SC. Having murdered five people already, practical minded citizens are armed and ready, and traveling in groups.

Over 1000 leads have been given to the investigators, who set up a special command with state law enforcement officials. Over 100 law enforcement personnel are assisting in the investigation. The Cherokee County Sheriffs department has canceled all vacations and leaves until the killer is apprehended.

I am speculating now: According to the reports, the killings are related. If this was a revenge type of affair, the serial killer may have already left the area. Please be aware that he may have already left that area and is traveling elsewhere. With his picture everywhere, there is a good chance that he is aware that his face is becoming well known. He may become desperate.

Do not approach even if you are well armed! You are not a gunfighter! Call law enforcement, observe and communicate.

The only advice I can offer is to use common sense.

Stay armed at all times.
Move in groups.
Secure your perimeter repeatedly.
Lock the house down, check the windows.
Let people know you are leaving, what route you are taking, and when you expect to arrive.

Update
CNN reports that a suspect has been shot and killed deader than a doornail. Police are investigating and correlating information:

Jennifer Timmons of the South Carolina Law Enforcement Divison told CNN there was no immediate confirmation of any link to the serial killer case. "Processing any crime scene is going to take a while," she noted.
One officer was wounded in the action, but due to good trigger control the police officers put them in the perp's firebox and hopefully ended his reign of terror!

The man may now be dead. Let us hope so!

PARASITIC SPECIES INFESTATION alien robot telescope spaceship: audiobook getting things done (GTD is the tag), the first few tracks of PALE BLUE DOT are good, as we transition to a knowledge based global society

MIT OCW designing your life. The art of war flashcard deck, wikipedia article audio book the 48 laws of power... RAW stem cells movies: Eagle EYE, Minority Report, (gps and audio recording + all video survelance to DVR on web for all probation and parole ankle monitors, put more people on them and use software to monitor them, the probation or parolee pays for the ankle monitor and then gives it back to the probation office then the next probation pays for it again, thus buying another one) broadcom is makeing new version of these chips every two months now GPS + Bluetooth + WiFi + FM combo chip)
audio + video security DVR in juvinile prisons with audiobooks streaming leave the headphones you buy behind for the next inmate